Covid case from mainland leads to a Macau hotel lockdown 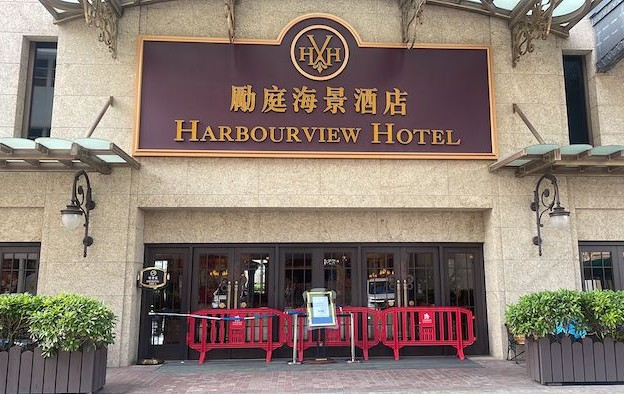 The Harbourview Hotel at Macau Fisherman’s Wharf on the city’s peninsula has been temporarily sealed off (pictured), and the people there kept inside for testing. That was after a 60-year-old woman from mainland China who had been staying as a guest was confirmed on Saturday to have Covid-19. As of Monday morning, the hotel was still shut to outsiders, according to GGRAsia’s checks.

Between November 15 and 19, she had “visited many places in Macau” and an “epidemiological investigation is in progress”, said a Saturday update from Macau’s Novel Coronavirus Response and Coordination Centre.

Her itinerary included visits to several Cotai casino resorts run by gaming operator Sands China Ltd. On November 16 at around noon, she took a shuttle bus from Sands Macao on the peninsula, to the Venetian Macao site. She then visited the Venetian Macao, the Londoner Macao and the Parisian Macao resorts.

The woman claimed her visits to the Cotai properties did not include entry to any shops or casino areas.

On November 14, she and two family members had taken a flight from Suzhou, in Jiangsu province, to Zhuhai Airport, in Guangdong province, next door to Macau, before travelling to Macau.

She developed a cough on the morning of November 15, and fever and fatigue on November 16.

The case was detected in the early hours of Saturday via a sample submitted to a nucleic acid testing station at Sands Macao next door to Fisherman’s Wharf.

“Since the case began to develop symptoms on the second day after arriving in Macau, it was preliminarily judged as a confirmed case of imported novel coronavirus,” said the response centre.

The residents and hotel staff at Harbourview Hotel are “undergoing nucleic acid [testing] and medical observation on the spot,” said the statement. It didn’t mention how many people were locked down. The hotel is a non-gaming property.

The woman has been taken to the Public Health Clinical Centre at Coloane for isolation and treatment. The two accompanying family members underwent nucleic acid tests on Saturday. Those initial tests were ‘negative’, but the people are also in isolation for observation.

The decision by the Macau government to grant fresh 10-year licences to each of the city’s six incumbent casino operators has been welcome by top management at those firms. Each of the concessions... END_OF_DOCUMENT_TOKEN_TO_BE_REPLACED