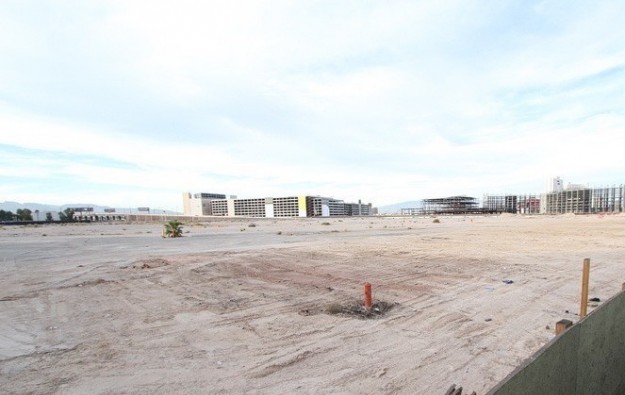 Australian casino operator Crown Resorts Ltd officially drew a line on Thursday under its plans for an investment at the northern end of the Las Vegas Strip in the Nevada, U.S. gambling hub.

The company said it had an agreement to sell to a subsidiary of casino firm Wynn Resorts Ltd, Crown Resorts’ interest in a 34.6-acre (14-hectare) vacant site (pictured) on Las Vegas Boulevard, for US$300 million.

In May, brokerage CBRE Group said in a press release it had been hired by Crown Resorts to sell the plot – that had been earmarked for a casino and hotel project named “Alon” – for as much as US$400 million.

Since then Crown Resorts – which had made a capital commitment to the project - has undergone a significant restructuring of its finances and business model – including a recent scaling down of its Chinese VIP gambling business following the detention in mainland China in October 2016 of several company representatives – and the subsequent conviction and jailing of some this year – on allegations of gambling-related crimes, understood to be a reference to marketing within mainland China of casino services.

Until May this year, Crown Resorts was an investor alongside Hong Kong-listed Melco International Development Ltd in Asian casino operator Melco Resorts and Entertainment Ltd – known previously as Melco Crown Entertainment Ltd before a series of stock sell-downs by the Australian partner.

In Thursday’s filing to the Australian Securities Exchange, Crown Resorts said the sale of the Alon site was subject to due diligence and other standard conditions.

Crown Resorts said the transaction was likely to be completed in “late January 2018” and that the vendor’s share of the gross proceeds – after taking into account minority interests – was expected to be “approximately US$264 million”. In June 2017, Crown wrote down the carrying value of its investment in Alon to US$200 million, equal to US$176 million net of minority interests.

In its own Thursday press release on the deal, Wynn Resorts did not specify to what use it wished to put the land. But the U.S.-based operator – which additionally has operations in the Macau market – clarified that it was purchasing not only the Alon site, but “four additional acres connected to the site” for a total of US$336 million. The land is on the western side of Las Vegas Boulevard, opposite Wynn Las Vegas and Wynn Encore.

Wynn Resorts stated in its release: “The future development of the land will further change tourist visitation patterns in Las Vegas drawing more visitors to the north end of Las Vegas Boulevard and its collection of luxury resorts, including the existing Wynn Las Vegas and the Paradise Park development slated to begin construction in January 2018 on the site of the former Wynn Golf Course.”

The analysts added: “The value of the land is also likely to be enhanced by the proximity to the Las Vegas Convention Center expansion, which is expected to be completed in 2021. Accordingly, we believe the most likely path for Wynn is one of patience.”

In other developments on Thursday, Crown Resorts said that the same day a subsidiary of the group had received approximately 4.2 million shares of U.S.-based casino operator Caesars Entertainment Corp – previously held by a co-investment vehicle for the benefit of Crown Resorts.

“Crown Resorts intends to sell its Caesars shares. The current market value… is approximately US$54 million based on the December 13, 2017 closing price of Caesars shares,” added the Australian operator.

The company further stated on Thursday that company director Mr Packer had agreed in principle to buy two floors of Crown Resorts’ new project at Barangaroo in Sydney, New South Wales – a scheme now known as Crown Sydney Hotel Resort – for AUD60 million (US$46 million). The sale property forms part of what is known as Crown Sydney Residences.

Crown Resorts additionally said in the same filing that it was in talks with the management team of Australian betting brand CrownBet over a potential sale of Crown Resorts’ 62 percent interest in CrownBet, “together with loans advanced by Crown Resorts to CrownBet,” for AUD150 million.

“There is no certainty as to whether a transaction will eventuate,” noted Crown Resorts. The firm had flagged in late November its interest in selling its stake.

Donald Carducci, an analyst at JP Morgan Securities Australia Ltd, said in a Thursday note of Crown Resorts’ announcements that day: “The asset sales would represent significant progress along Crown’s debt reduction strategy, as we currently estimate financial year 2018 net debt of AUD266 million, which would result in a net cash position if all the announced asset sales materialise in second half 2018.”

International casino operator Las Vegas Sands Corp has been ranked as the most sustainable firm in the global casino sector, according to the 2023 edition of the S&P Global Sustainability... END_OF_DOCUMENT_TOKEN_TO_BE_REPLACED