Crown gets planning nod for new hotel in Melbourne 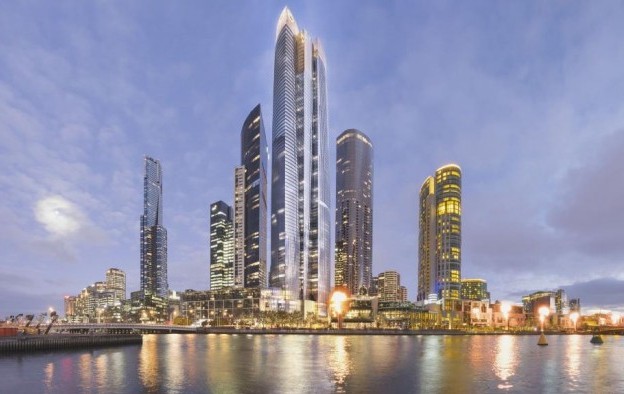 Australian casino operator Crown Resorts Ltd said on Thursday that the Victorian government has given conditional planning permission for a proposed 90-storey hotel and apartment tower adjacent to Crown Melbourne.

The new hotel tower (pictured in a rendering) – to be known as One Queensbridge – is to be developed in partnership with the Schiavello Group. The project has a budget in the range of AUD1 billion (US$762 million) to AUD1.5 billion, according to Australian media reports.

The project comprises 388 hotel rooms and about 700 residential apartments, Crown Resorts said in a filing on Thursday. The development includes a pedestrian bridge over Queensbridge Street to the casino at Crown Melbourne.

Crown will have the right to “acquire and manage the hotel on completion,” the casino operator had said in previous filings to the Australian Securities Exchange. No gaming operations will be conducted in the new building, the firm had stated previously.

As a condition of the approval, the partners have agreed to invest up to AUD100 million to improve tourism and public infrastructure in the areas adjacent to the project.

The company said that Crown Melbourne’s three hotels have an occupancy rate “consistently over 90 percent”. “The proposed addition of this luxury hotel will also assist Melbourne to meet its future tourist accommodation demands, with Crown being able to offer over 2,000 guest rooms and suites, upon completion,” the firm added.

Crown Resorts estimates the economic benefits for the state of Victoria at AUD2.1 billion including the creation of 3,000 direct and indirect jobs during construction and an additional 1,000 operational jobs after completion.

The casino operator announced in August 2014 that it had reached a deal with the Victorian government to extend the expiry date of the Crown Melbourne gaming licence from 2033 to 2050.

Crown Resorts is still planning an initial public offering (IPO) of a 49 percent interest in some of its own Australian hotels, via a proposed real estate investment trust. The IPO plan is likely to include the group’s two hotel properties in Melbourne, Victoria, as well as two in Perth, Western Australia, according to previous filings.

Only two of Macau’s 18 satellite casinos – the Rio Casino and the President Casino – have closed amid changes to the city’s regulatory system for such properties, and against... END_OF_DOCUMENT_TOKEN_TO_BE_REPLACED