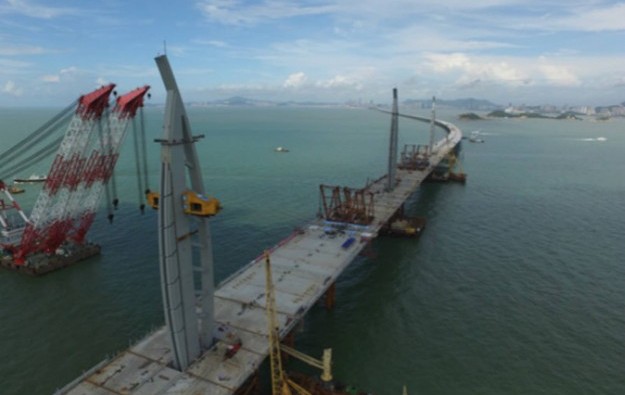 The Hong Kong-Zhuhai-Macau Bridge (HZMB), which will provide a direct road link to Macau from Hong Kong and its major airport, “may open to traffic as soon as June,” said a Monday report from Karen Tang of Deutsche Bank AG.

The analyst stated that – on the strength of the likely impact of the new infrastructure – she was raising her institution’s estimates for second-half 2018 into full-year 2019 mass-market gaming revenue growth in the Macau market by five percentage points, to 13 percent year-on-year, from 8 percent previously.

“This should boost Macau visitations, initially from Hong Kong and eventually also from China, as the bridge connects the Hong Kong airport to Macau in a 30-minute journey. This is positive not only for mass gaming but also for retail and hotels,” wrote Ms Tang.

In December Hong Kong’s Chief Secretary for Administration, Matthew Cheung Kin-chung, said the Hong Kong-Zhuhai-Macau Bridge (pictured in a file photo) would open to traffic in 2018, but the precise date was still to be determined by China’s central government.

In other commentary, Deutsche Bank and Union Gaming Securities Asia Ltd said they were scaling down the likely positive contribution to SJM Holdings Ltd’s 2019 earnings from its new Cotai resort Grand Lisboa Palace.

Analyst Grant Govertsen of Union Gaming stated in a Monday update on Cotai construction projects, and referring to Grand Lisboa Palace: “Construction has been delayed for a variety of reasons and we now expect it to be completed at some point in 2019 and we are modelling a 2020 economic impact for the property.”

In late February, following SJM Holdings’ 2017 annual results, the group’s chief executive Ambrose So Shu Fai said construction work on the HKD36-billion (US$4.6 billion) Grand Lisboa Palace made “substantial progress” in 2017. “We are still striving for construction to finish by the end of this year,” he added. Earlier in February, the SJM Holdings CEO said the company was aiming to start operations in Cotai in 2019.

In a another note on Monday, Sanford Bernstein said it expected Macau’s April casino gross gaming revenue (GGR) to expand in the range of 17 percent to 21 percent year-on-year, to between MOP23.5 billion (US$2.91 billion) and MOP24.4 billion.

Japanese brokerage Nomura said in a note that day it estimated April GGR would grow by 18 percent year-on-year, which it noted was 150 basis points above the latest Consensus Metrix estimate of 16.5 percent.

Most of Macau’s casino operators are likely to generate positive free cash flow in the first quarter, given the robust recovery level of mass-market gross gaming revenue (GGR) in January, relative... END_OF_DOCUMENT_TOKEN_TO_BE_REPLACED