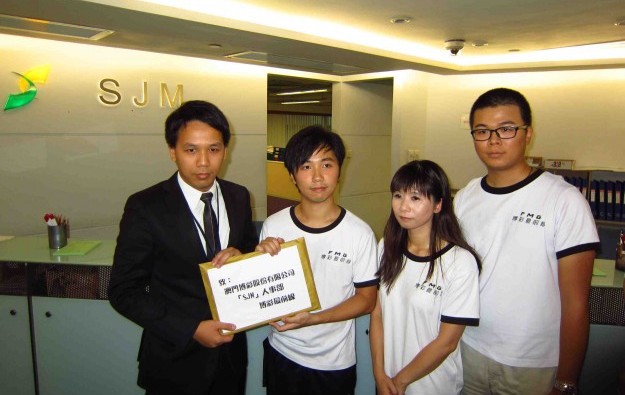 SJM Holdings Ltd is the latest casino operator targeted by casino labour group Forefront of the Macao Gaming in under one month, after hundreds gathered on Thursday outside of the firm’s human resources offices to protest against the company’s pay and promotion policies.

Labour group president Ieong Man Teng (pictured, second from the left) told GGRAsia the workers had requested a meeting with SJM Holdings for Thursday to discuss its pay and promotion policies. Mr Ieong added that the group received no reply from the company and therefore decided to organise the protest, which ended with the delivery of a letter with the group’s demands to a representative from SJM Holdings.

Mr Ieong said around 1,500 people attended the protest. No police figures were available. Many of the protesters had their faces covered. It is not clear how many were workers from SJM Holdings.

The labour group demanded SJM Holdings increase by approximately 10 percent across the board the pay of casino floor staff.

There was also a call to increase the entry-level salary of inexperienced dealers to MOP17,500 (US$2,192), then to be increased to MOP19,000 after the first year of work. Once the dealer completed two years with the company, the salary should be raised to MOP22,000, the association told GGRAsia.

Dealer supervisors should start with a basic salary of MOP24,000, which should be increased to MOP26,000 a year later, the Forefront of the Macao Gaming added.

The association is also demanding 14 months of pay and annual increases similar to the ones granted to civil servants in Macau.

The Forefront of the Macao Gaming has supported similar initiatives targeting other gaming operators in Macau. On July 24, it organised a protest outside Sands China Ltd’s Venetian Macao that gathered more than a 1,000 workers. On August 4, Galaxy Entertainment Group Ltd became the second casino operator targeted by ‘people power’ after hundreds gathered outside the firm’s StarWorld Hotel.

SJM Holdings on Wednesday posted a net profit of HKD3.9 billion (US$503 million) for the first half of the year, up by 1.9 percent rise from a year earlier.

The company said staff costs, including share-based payments, rose by 16 percent year-on-year to HKD2.9 billion in the first half of 2014.

As at 30 June 2014, SJM Holdings had approximately 21,700 full-time employees, the company said in its interim results statement.

“The group’s employee turnover rate was minimal in the first half of 2014,” the firm said, adding that it “regularly reviews the remuneration policy and evaluates staff performance”.

SJM Holdings chief executive Ambrose So Shu Fai said last week the company was not joining the race for workers, as rivals in the industry announce pay bonuses and share award programmes to retain and attract staff.

“We are not joining the race today. No need for us to do so until near the completion time [of the Lisboa Palace in 2017],” he said.

Pragmatic Play Ltd, a content provider to the iGaming industry, has launched a new slot game called “Monster Superlanche”. The game is played across 6×5 reels, with colourful ‘monsters’... END_OF_DOCUMENT_TOKEN_TO_BE_REPLACED