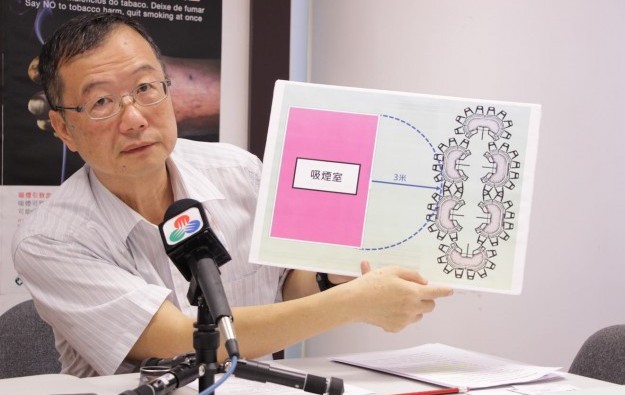 Important technical detail needed for smoking lounges inside Macau casinos will be released “as soon as possible”, a government official stated on Wednesday. The information is needed by the city’s casino operators so they can comply with a new regime on smoking in public places as approved by the Legislative Assembly on July 14.

The new regime includes banning tableside smoking in VIP gambling areas. Operators can however apply to construct smoking lounges – free of gaming – near to high-roller gambling rooms. Technical specifications for such rooms are to be set out via executive order.

But no timetable for that was mentioned by Tang Chi Ho (pictured), head of the city’s Tobacco Prevention and Control Office, during Wednesday’s briefing.

According to Mr Tang, it is highly likely that gaming facilities would be required to be at least 3 metres (9.8 feet) from the entrance to any smoking lounges inside casinos.

In 2014, the government ordered casino main floors be smoke free with effect from October 6 that year. The following year, some operators were still awaiting approval for gaming-free smoking lounges in mass-market gambling areas.

Under the city’s newly-amended Regime on Tobacco Prevention and Control, which will come into effect in January 1, 2018, Macau casinos will be given one year to install smoking lounges free of gaming in their VIP areas. All smoking lounges in casinos – including the existing ones set up on mass floors since the ban on free-for-all casino smoking – will also have to conform to enhanced technical standards.

Mr Tang stated during the media briefing on Wednesday that such instructions would be released “as soon as possible”, but did not give a concrete date.

“We hope we can publish [regulations concerning smoking lounges] as soon as possible. But the announcement has to be made in the Official Gazette,” said the official.

“Currently, we are coordinating with stakeholding government departments and various organisations on this matter,” Mr Tang added.

“There are still some technical issues that are in the process of being coordinated,” he noted. Communication with gaming operators will be “a few steps after,” said the official.

“We will communicate with parties such as the gaming operators after the regulations are announced,” he noted.

During this month’s final reading in the Legislative Assembly of the revised bill on smoking, Angela Leong On Kei, an executive director of local gaming operator SJM Holdings Ltd, voiced her concern that some so-called satellite casinos – those making use of the gaming licence of one of the six Macau operators but with third-party management – might not be able to set up smoking rooms that adhere to government standards.

She asked government officials if they might show such venues flexibility regarding compliance, and possibly grant them extensions on the implementation deadline.

Mr Tang stressed in his Wednesday comments that no such exceptions were anticipated. There was already an extension regarding the compliance deadline, in the form of the one-year grace period written into the law.

“It is difficult to introduce ‘flexibilities’ into a law,” he stated. “Therefore, we are going to work in accordance with the regulations and standards. If [smoking lounges] do not meet the standards, we are not going to approve them,” he added.

Regarding the approval procedure of casino smoking lounges, Mr Tang said it would be difficult to establish an interdepartmental task group to handle the applications.

“We have already studied this issue, but there are some technical difficulties because different departments examine a case based on different laws and regulations. There are also many technical requirements concerning construction works. But we are still coordinating,” he said.

Mr Tang said there were discussions involving the Land, Public Works and Transport Bureau and the Fire Services Bureau to see if it were possible to speed up future approvals for smoking lounges.