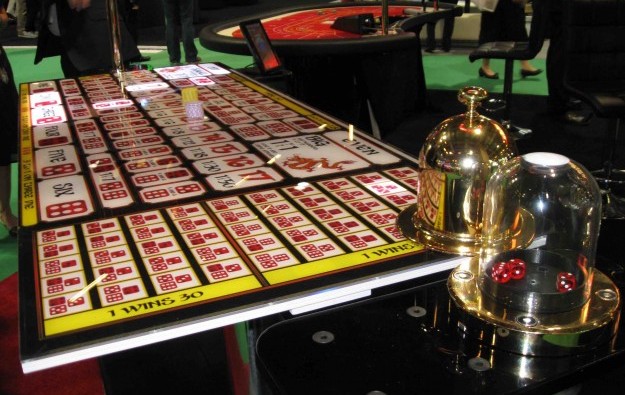 Table games equipment specialist Paltronics Macau Ltd now has its automatic dice recognition product for sic bo games ready for the market. “We have previously shown that as a concept: now it is fully working,” Simon Witty, the firm’s director for business development, told GGRAsia.

“The dice shaker [pictured] now has four cameras hidden in the base, and that allows the shaker always to be able to read the scores on the dice, even if one die is covering any of the other three dice. The cameras capture an image reflected from a mirror inside of the top of the shaker dome, and automatically read the dice numbers every time,” he explained.

“The shaker has a contactless ‘actuator’ or shaker – meaning no solenoids – so it is maintenance-free. The second feature is a locking lid, which activates after ‘no more bets’ is called,” added Mr Witty.

“The new feature is that we are reading the dice automatically. With this system the dealer is never required to ‘punch in’ the result of the game. It only accepts the result that that has been recorded by the automatic dice recognition feature,” the Paltronics executive stated.

“It stops any risk of player-dealer collusion in the game of sic bo: for example a dealer inputting a wrong result and awarding a win to a player,” he added.

Mr Witty said a second product Paltronics is focusing on at this year’s Global Gaming Expo (G2E) Asia is the “Clarity light boxes – this time for roulette table surfaces”.

He explained: “We have taken the technology from the Clarity Sic Bo table product – which is a very clear display on a very thin surface – and adapted it for roulette. So now we have Clarity Roulette. With that we are using the light box to ‘underlight’ the winning number on the table.”

Mr Witty said: “We use a clear underlay. On a standard roulette table you have what we in the industry refer to as the substrate, which is normally wood, you have an underlay that provides the bouncy feel, and then you have the layout material. With Clarity Roulette you can use a standard table layout. But the underlay we use is a translucent material and that means the power of the LEDs in our light box is bright enough to shine through the felt and underline the winning result. It makes the game more visual and helps the players and the dealer see what the winning numbers are.”

Paltronics is also displaying Lucky Tie, the company’s baccarat progressive, at G2E Asia 2016. Lucky Tie “pays out when there is an 88-88 tie,” said Mr Witty.

He added: “We are moving to trial stage now with a couple of operators, although I can’t identify which ones. But this will be live [in the market] within eight to 12 weeks time.”

The Earth Tower, the second tower of the Sheraton Grand Macao hotel at the Londoner Macao casino resort on Cotai, is to be used to isolate people already confirmed with Covid-19 infection, the Macau... END_OF_DOCUMENT_TOKEN_TO_BE_REPLACED