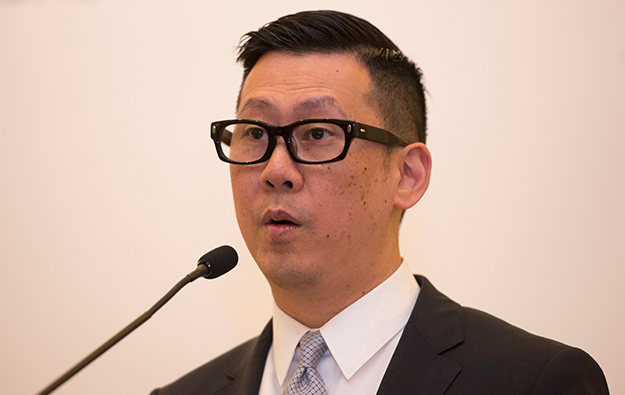 The director of Macau’s Gaming Inspection and Coordination Bureau, Paulo Martins Chan (pictured), says the city’s casino gross gaming revenue (GGR) is steadily recovering. But he stopped short of calling a bottom to the market.

“There’s still instability or factors that will affect our economy, so we can’t say that we are already very safe,” said on Tuesday the head of the local gaming regulator, a body also known by its Portuguese acronym DICJ.

“What we are trying to do is to create an industry that features integrity and quality. We are working hard on this; trying to regulate more,” said Mr Chan. “Speaking about [GGR] evolution, we believe there will be a more stable development of our gaming revenue.”

Mr Chan’s comments on the latest developments in the market were made on the sidelines of Macao Gaming Show 2016. The three-day trade show and conference – focused on the Asian gaming industry – runs until Thursday at the Venetian Macao.

The head of the local gaming regulator mentioned in his Tuesday remarks that junket operators – the middlemen that bring the high rollers to casinos – play an important role in the city’s casino industry.

“It’s not fair to say that we are just giving importance to the mass market. Certainly, junkets are a very important component of the whole gaming industry,” he said.

Mr Chan additionally said the Macau government wants “a more regulated junket activity”. The head of DICJ said the bureau had finished auditing the financial statements of the city’s junket operators, with about 19 junkets still struggling to meet the new accounting requirements introduced earlier this year.

“We have finished the inspection of the accounting system of all 145 junkets. Some of them [their accounting systems] are not satisfactory,” said Mr Chan. “Until the end of the year – which is the time for renovation of the junket licence – we will observe what is the improvement.”

Mr Chan was one of Tuesday’s speakers at the conference segment of Macao Gaming Show. In his speech, he highlighted the need for Macau to “promote economic diversification” by introducing more non-gaming elements in the city’s casino resorts.

He said DICJ would continue revising legislation and regulations, introducing new technological standards to help the gaming industry develop in a more regulated and stable manner.

Macau’s casino gross gaming revenue (GGR) for the first five days of February is estimated at MOP1.9 billion (US$235.1 million) – or MOP380 million per day – a level that suggests a “45... END_OF_DOCUMENT_TOKEN_TO_BE_REPLACED