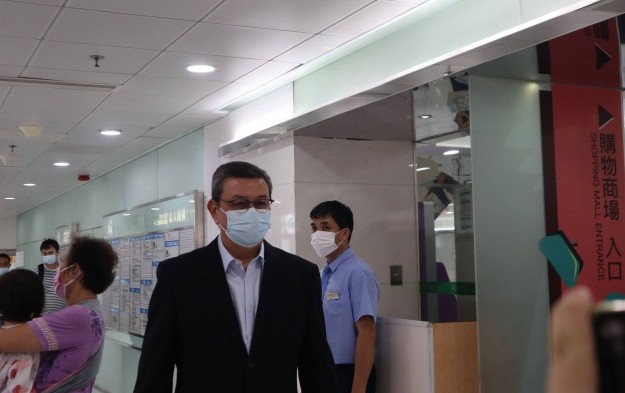 A Macau court case on whether a third-party company is entitled to the equivalent of US$12-billion compensation because of the role it claimed to have in United States-based Las Vegas Sands Corp getting a Macau casino licence nearly 20 years ago, heard on Thursday from the person who headed the city’s gaming regulator at the time of the tender decision in 2002.

Manuel Joaquim das Neves (pictured at court), from 1997 until retiring in 2015, the head of Macau’s Gaming Inspection and Coordination Bureau, a body also known as DICJ, was called as a shared witness by the parties in the case: the claimant for damages, Asian American Entertainment Corp; and the other side, entities connected to Las Vegas Sands.

At one stage, Las Vegas Sands was in a partnership for a Macau venture with Chinese entrepreneur Lui Che Woo, via an entity called Galaxy Casino SA. But in December 2002, the Macau government allowed an amendment to the Galaxy entity’s concession contract, so that a subsidiary of Las Vegas Sands was granted a sub-concession spun off the original Galaxy licence.

Mr Neves confirmed to Macau’s Court of First Instance that an important factor in weighing Galaxy Casino SA’s bid was its partnership with Las Vegas Sands. The latter firm had experience in the Las Vegas market, in Nevada, regarding meetings, incentives, conferences and exhibitions (MICE) business, something the Macau government had wished to encourage for its tourism market.

The former official was responding to a question by Macau-based lawyer Jorge Menezes of FCLaw Lawyers & Private Notaries, who represents Asian American.

Mr Neves had been a member of the Macau Gaming Commission set up in 2001, and which assessed the bids for the city’s gaming concessions during a liberalisation process following on from a 40-year casino monopoly held by Stanley Ho Hung Sun.

Las Vegas Sands had initially teamed up with Asian American for Macau’s licence-tender process. But the U.S. casino group later switched to a partnership with Galaxy Casino SA, before being allowed to go it alone via a sub-concession arrangement spun off from the Galaxy licence.

Asian American’s lawyer Mr Menezes asked Mr Neves whether he recalled if the bid content presented by Asian American and Las Vegas Sands bore any similarity to the bid later made by Galaxy Casino SA with Las Vegas Sands. Mr Neves said he “did not recall” the detail, and had a “blurred” memory regarding the topic.

But Mr Neves confirmed that Las Vegas Sands’ expertise and experience in managing resorts and running MICE business in the U.S., had been viewed by the Macau government as “very important”, considering the city’s “public interests” at the time of the gaming licence-tender process.

Such expertise gave Las Vegas Sands “a relatively high edge” when compared to the bids submitted by the other competitors with experience in casino operations, Mr Neves told the court.

Mr Neves stressed at the hearing that the Gaming Commission had “tried its best” to adopt an “objective” position when reviewing all the bids, and adopted the “most rigorous” criteria in assessing them.

Mr Neves was shown several documents lodged by the parties to the case, on the issue of when Las Vegas Sands ended its relationship with Asian American. Mr Neves said he “could not recall” the details.

The case, which opened on Wednesday, continues.