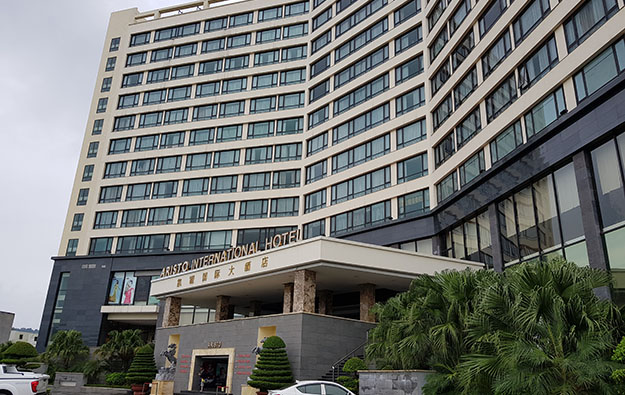 Donaco International Ltd, an Australia-listed boutique operator of casinos in Indochina, has announced lay-offs and unpaid leave for staff in February at its Aristo International Hotel (pictured) and associated casino near Vietnam’s border with China, due to the negative impact of a novel coronavirus.

The company said in a Wednesday update filed with the Australian Securities Exchange it would also be “deferring various capital expenditure projects” related to that property.

Brokerage Union Gaming Securities LLC suggested in a Tuesday note that the regional casino sector in Asia Pacific had an “elevated profile risk” until such time as there is “greater clarity” on the global outbreak of the virus, first reported in Hubei province in mainland China.

Donaco said in its latest update: “The virus has … had a specific impact on Donaco’s business operation at the Aristo International Hotel in Lao Cai, Vietnam, which borders Yunnan province” in mainland China.

It added: “In response to the slowdown in the business, Aristo management has arranged unpaid leave for many staff members in February, and has also reduced total headcount, as well as deferring various capital expenditure projects.”

According to Donaco, the border checkpoint at Lao Cai “is currently tightly restricted, with crossing allowed only for visitors with an ‘urgent’ or ‘official’ business reason”. The company noted that such restrictions had led to a “substantial reduction in players visiting the Aristo casino hall, and consequent reduction in gaming turnover.”

Donaco said in Wednesday’s filing that currently there was “no time frame” on how long the “partial closure” of the border crossing might last. It would “likely to depend on the success of the broader efforts being undertaken within China and around the world to contain the virus,” the firm noted.

Donaco’s flagship casino hotel venue, the Star Vegas Resort and Club, is near Cambodia’s border with Thailand, a country where casino gambling is illegal. In its latest filing, Donaco said there had been “no direct impact noticed as yet from the coronavirus” on its Cambodia business. “The border crossing from Thailand into Poipet remains open as usual,” it stated.

The firm added: “In the longer term, if efforts to contain the virus are unsuccessful, there is likely to be an impact on the Thai economy generally, which has a strong tourism element. This may lead to an overall reduction in demand from Thai visitors to the Poipet casino.”

Hong Kong-listed NagaCorp Ltd, which has a monopoly casino licence for the Cambodian capital Phnom Penh, said in a Monday announcement that the “the company is of the opinion” that the coronavirus problem “will be short-lived”.

Donaco said earlier this week that two representatives of an institutional investor – people who in August had first been made non-executive directors – have now been made executive directors of the gaming group, to work on “legal, operational and financial matters” for the company, including “corporate activity and strategic projects, as well as investor relations matters”.

Some Macau casinos visited by GGRAsia on Thursday, actually had tables that were closed, notwithstanding strong consumer demand during Chinese New Year (CNY). The reasons for some tables being... END_OF_DOCUMENT_TOKEN_TO_BE_REPLACED