Duterte thanks Pagcor for remitting US$817mln amid Covid 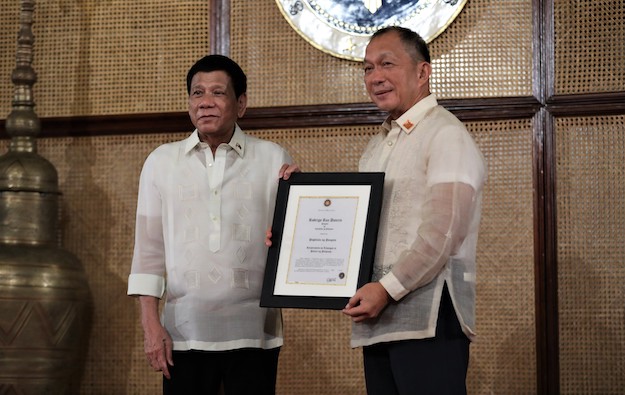 The Philippine Amusement and Gaming Corp (Pagcor), the casino regulator in that country, said in a Tuesday press release it had received a presidential commendation from that nation’s outgoing leader, Rodrigo Duterte (pictured, left), to mark the agency’s “contributions to nation-building and to the government’s Covid-response efforts”.

Pagcor, which also operates some gaming venues, collects fees and other payments from the gaming operators it licenses.

The commendation was received by Pagcor president and chief operating officer, Alfredo Lim (pictured, right), at the Malacanang Palace on June 16.

Mr Lim was cited as stating that even during the height of community quarantine restrictions in 2020 and 2021, Pagcor had remitted a total of PHP44.53 billion (US$817 million) to the government through its mandated contributions and other corporate social responsibility programmes.

“The pandemic may have gravely affected Pagcor’s revenue generation efforts but it did not stop us from responding to the call of service,” Mr Lim said.

Pagcor chairman and chief executive Andrea Domingo was also quoted in Tuesday’s press release. She said the agency had “released a total of PHP1.13 billion worth of grants to the health care sector,” as part of Pagcor’s “Covid response during the height of the pandemic”.

Ferdinand Marcos Jr, Mr Duterte’s successor as the country’s president, will be sworn in on June 30. Mr Duterte’s daughter, Sara Duterte, is to be vice president to the new leader, and took her oath of office on Sunday (June 19).

In the past, there has been a rejig of Pagcor’s senior leadership when a new national leader takes office.

Casino equipment supplier Sega Sammy Creation Inc said in a Friday release it was debuting its Genesis Crest 43J cabinet in Asia. The product will be available at an in-person trade show, G2E Asia:... END_OF_DOCUMENT_TOKEN_TO_BE_REPLACED