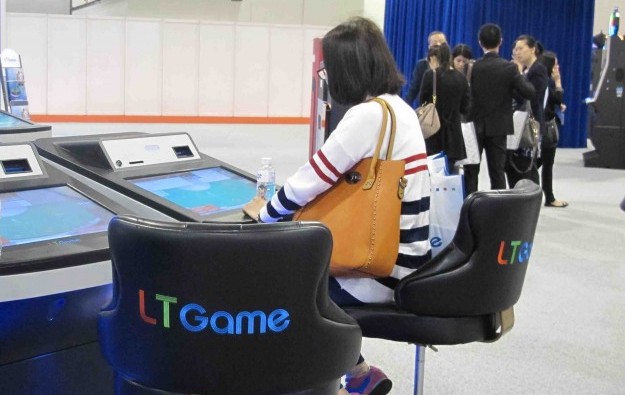 LT Game has currently three E-Baccarat tables in the casino at Macau Jockey Club, which reopened in May under a gaming licence of SJM Holdings Ltd and management of Paradise Entertainment. The table combines a live dealer with electronic betting.

“We have been receiving good feedback on the E-Baccarat table, with good growth rates since we launched,” Mr Chun told GGRAsia.

Mr Chun confirmed that Sands China Ltd has placed an order for about 10 E-Baccarat tables to be on trial at casino resort Venetian Macao. They will be delivered early 2015, he said.

“Other operators have also shown interest, but they have not yet placed any orders. We are still negotiating,” Mr Chun said.

The E-Baccarat product allows for between five and 10 players to play on the table simultaneously. The dealer just deals the cards – he is not required for placing bets or collecting winnings, the gaming manufacturer said in press releases when it launched the product.

The players are still able to flip the cards and have the experience of playing on a table like in any conventional baccarat table, but their payout will be done by the system automatically.

At the Daiwa Investment Conference Hong Kong 2014, which ended on Friday, management of Paradise Entertainment said a new cash and chips counting product, the “E-Dropbox”, is currently undergoing trials at SJM Holdings’ properties and at the Venetian Macao. The product is pending patent approval in Macau, stated a note from Daiwa Capital Markets.

According to Daiwa, Paradise Entertainment has guided down its Live Multi-Game (LMG) machine sales for 2014 “to just under 1,000, with the majority of the machines being sold in Macau”.

LT Game is already licensed as a gaming technology supplier in the U.S. states of Florida and Nevada. In August, LT Game inked a three-year distribution agreement with U.S.-based gaming supplier International Game Technology (IGT) for North America and Macau.

The deal takes effect from January and will enable LT Game to take advantage of IGT’s existing approval as a licensed supplier in multiple U.S. markets, Mr Chun said earlier this week.

“Management noted that all 700 machines expected to be deployed in the U.S. in 2015 will entirely be through IGT’s distribution channels, with 30 percent of the deployment being one-off sales and the remaining 70 percent on a recurring revenue model charging roughly US$50/LMG/day,” Daiwa said.

“The distribution arrangement with IGT is such that Paradise will pay a commission of 30 percent of the sales revenue to IGT for every machine deployed,” it added.

Most of Macau’s casino operators are likely to generate positive free cash flow in the first quarter, given the robust recovery level of mass-market gross gaming revenue (GGR) in January, relative... END_OF_DOCUMENT_TOKEN_TO_BE_REPLACED