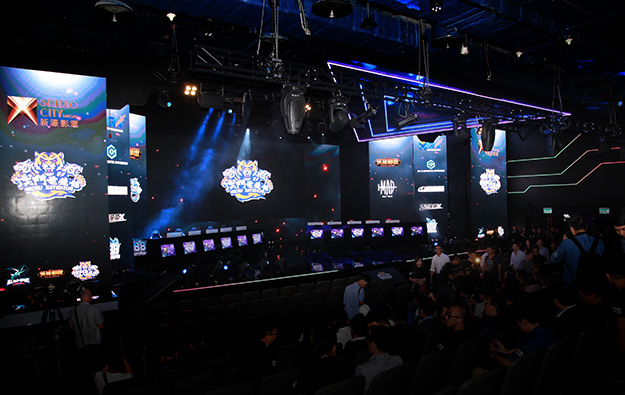 Melco Resorts and Entertainment Ltd, the promoter of Cotai casino resort Studio City, is in a “long-term partnership” with the companies running the recently-opened e-Sports venue at that property. The new e-Sports venue, branded “Macau EStadium” (pictured), could eventually be expanded in the future, said Geoff Andres, property president of Studio City.

The Macau EStadium – launched on Tuesday in partnership with Kowloon E-Stadium Ltd and ALL-IN E-Sports Ltd – has an area of 10,000 square feet (929 sq metres) and it can accommodate up to 274 guests. The venue, located in the west wing of the second floor of Studio City, aims to promote e-Sports events in Macau, including multi-player tournaments and live-streaming of e-Sports events taking place elsewhere.

“This is intended as a long-term lease [to the partners] and a long-term partnership. We think e-Sports is a new trend in entertainment around Asia and the world,” Mr Andres told GGRAsia on the sidelines of the launching event of the new e-Sports venue.

“We want to be in the front, and take the leading edge in this type of entertainment activity. So, this is just the beginning,” said the executive. “This is a long-term partnership – we’re also working on a potential expansion with them to have other rooms, smaller stadiums to do [e-Sports] training and other activities in the future,” Mr Andres added.

The Macau EStadium is due to host “an array of top” e-Sports competitions in the coming year, said Melco Resorts in a Tuesday press release.

Melco Resorts had announced in May a US$100 million investment to upgrade the gaming areas and the non-gaming attractions at City of Dreams Macau and its 60-percent owned Studio City property.

Lawrence Ho Yau Lung, chairman and chief executive of Melco Resorts, said in May that the company was planning the opening of new entertainment offerings at Studio City, including a new show in December, produced in collaboration with London-based entertainment architects Stufish. The property is also going to feature “Asia’s largest VR [virtual reality] zone”, and a “fantastic new street of food and beverage,” Mr Ho said at the time.

Commenting on the improvements to Studio City, Mr Andres said: “What we’re working on right now is with a partner to develop a virtual reality park, and we expect that park to open around the Chinese New Year [period] next year.”

According to the executive, the so-called VR park will have an area of approximately 50,000 square feet, featuring “fantastic technology and experiences for people to immerse themselves in that new excitement and entertainment”.

“In the next 12 to 18 months, Studio City is going to be the most fun place in Macau,” stated Mr Andres. “We really have a lot of new things going on around this environment, and is fun for people of all ages,” he noted.

A cut of 5 percentage points in the tax levied on Macau gross gaming revenue (GGR “would be equivalent to a 12 to 15 percent boost” to estimated industry earnings before interest, taxation,... END_OF_DOCUMENT_TOKEN_TO_BE_REPLACED