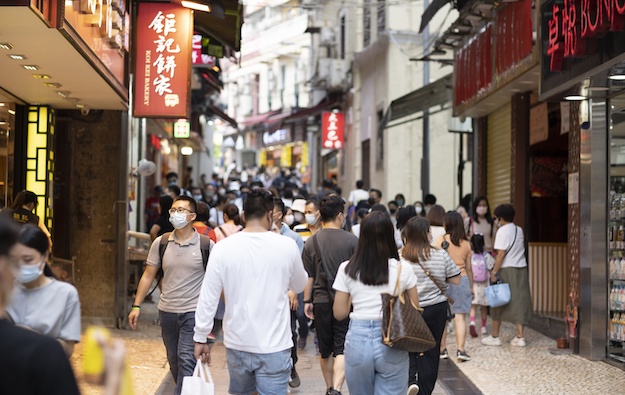 Macau saw an aggregate of 65,138 visitor arrivals – or a daily average of 8,142 – from December 20 to December 27 inclusive, with about half the tally entering the city via the Border Gate land crossing with neighboung Zhuhai, according to the latest data released by the Public Security Police.

The data indicate there was no evidence of uptick in visitor volume, despite easing of Covid-19 protocols for inbound and outbound travel. As recently as mid-November, the daily visitor tally had been around 16,000.

The Macau authorities had, starting from December 23, lifted quarantine requirements for people arriving in the city either from overseas, Hong Kong, or Taiwan. Since that date, transport options for people wishing to journey between Macau and Hong Kong have remained limited. Available options feature two bus services via the Hong Kong-Zhuhai-Macau Bridge – as passenger ferries between the two cities are still suspended.

It was reported last week though, that one of the ferry firms, TurboJET, might on December 30 resume a limited service between Macau’s Taipa Ferry Terminal and Hong Kong International Airport’s SkyPier. It was said there would be one round-trip service per day, on Friday and Sunday only.

Macau’s visitor arrival information for December 20 to December 27 released by the Public Security Police did not indicate place of origin for the visitors, but did list their point of entry.

Out of the 65,138 visitor arrivals recorded for the December 20 to December 27 period, an aggregate of 34,800 came via the Border Gate checkpoint. A total of 5,513 visitor arrivals via Hong Kong-Zhuhai-Macau Bridge was recorded during that eight-day period, representing only 8.46 percent of the total.

Some Macau casinos visited by GGRAsia on Thursday, actually had tables that were closed, notwithstanding strong consumer demand during Chinese New Year (CNY). The reasons for some tables being... END_OF_DOCUMENT_TOKEN_TO_BE_REPLACED