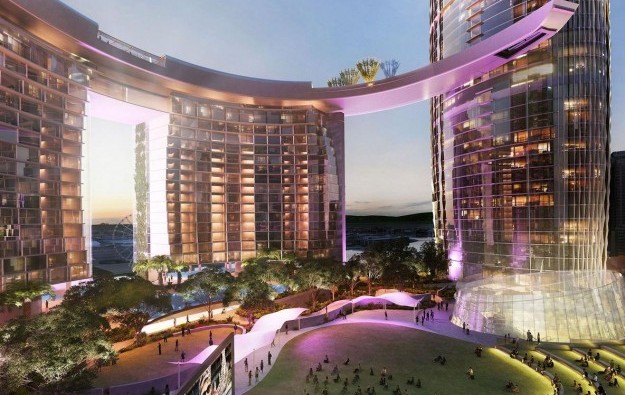 Australia’s Echo Entertainment Group Ltd has been chosen by the Queensland government to develop a multibillion-dollar casino resort (pictured in a rendering) in the Queen’s Wharf area of the state capital Brisbane, local media reported on Monday. Echo’s bid beat a proposal from market rival Crown Resorts Ltd, led by James Packer.

Queensland Premier Annastacia Palaszczuk announced on Monday that Echo had been awarded “preferred tenderer’’ status for the urban redevelopment scheme. Echo already holds Brisbane’s only current casino licence, at the Treasury Casino and Hotel. The firm is said to have a lease valid until 2070.

Ms Palaszczuk stated the Echo bid was the standout one because of its better proposals for the use of public space and because the company was in a position to start construction soon. “We are very excited about this proposal and what it means for Brisbane,” she was quoted saying.

Construction is due to begin by late 2016 and is likely to be completed by 2022, according to media reports.

In June last year, Echo announced it had signed a binding memorandum of understanding on the casino resort project with Chow Tai Fook Enterprises Ltd. The latter privately held firm was founded by Cheng Yu Tung, a long-standing investor in the parent company of Macau casino operator SJM Holdings Ltd.

The proposed joint venture will consist of Echo, Chow Tai Fook Enterprises and Far East Consortium (Australia) Pty Ltd, a unit of Far East Consortium International Ltd. Echo will provide 50 percent of the capital, with the other partners giving 25 percent each.

Echo hasn’t given any public commitment on the minimum amount of money to be invested in the project, but media reports have mentioned a figure of approximately AUD2 billion (US$1.47 billion).

The project will have luxury hotels, including one under the Ritz-Carlton brand and one under the Rosewood brand; residential apartment towers; luxury shopping; and public spaces along the Queen’s Wharf’s dock.

In June 2011, Echo was spun off from Tabcorp Holdings Ltd, an Australian wagering, gaming and Keno operator that dominates the country’s on-course horse race betting market. Echo, which owns The Star casino hotel in Sydney, says it will move its headquarters to Brisbane from Sydney.

The casino firm’s win comes two years after Crown Resorts, a partner in Asian casino operator Melco Crown Entertainment Ltd, won a long-running battle to establish a second casino in Sydney. The property, at Barangaroo – also a waterside district marked for urban regeneration – is due to open in late 2019.

In its bid for the Brisbane tender, Crown Resorts had joined forces with Chinese state-owned enterprise Greenland Holding Group.

The Echo win means that Queensland will have four casinos by the turn of the next decade. One of those is a project by Hong Kong businessman Tony Fung Wing Cheung, who reportedly plans to spend as much as AUD8.15 billion on a huge casino resort near the coastal city of Cairns in Queensland.

Casino equipment supplier Sega Sammy Creation Inc said in a Friday release it was debuting its Genesis Crest 43J cabinet in Asia. The product will be available at an in-person trade show, G2E Asia:... END_OF_DOCUMENT_TOKEN_TO_BE_REPLACED