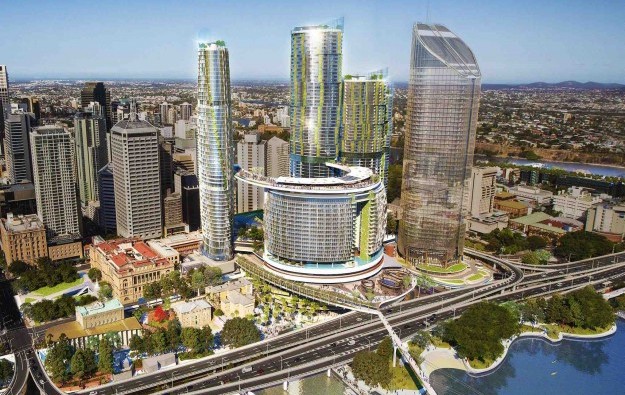 Australian casino operator Echo Entertainment Group Ltd announced on Monday that a consortium it leads has signed development agreements with the Queensland government for a AUD3-billion (US$2.1-billion) project in the state capital, Brisbane.

According to Echo’s filing, the parties in the consortium have formed two joint venture vehicles: one for the development of the casino resort; the second for the residential part of the project. The two joint venture vehicles are responsible for completing the development of the Queen’s Wharf Brisbane project (pictured in a rendering), said Monday’s filing.

The proposal includes a total investment of about AUD3 billion, with AUD2 billion of it earmarked for a casino resort with 1,100 hotel rooms. The residential portion of the project will feature approximately 2,000 apartments, with a capital development cost of AUD900 million.

The total investment includes a payment of AUD272 million to the Queensland government when the casino resort starts operations. An extra AUD880 million should be paid by 2032 – 10 years into operations.

Construction is anticipated to start in 2017 and Echo expects the new project to open in 2022.

“We are excited to have finalised and signed the development agreements with the Queensland government to progress our vision to develop Queen’s Wharf Brisbane into a globally recognised integrated resort that competes with the best in Macau, Singapore and any other destinations worldwide,” Matt Bekier, Echo’s chief executive, said in a statement.

In Monday’s filing, Echo said the agreements provide for a new casino licence to be issued for Queen’s Wharf Brisbane. The company will also retain ownership, under a long-dated lease, of the buildings at its existing Brisbane gaming venue, Treasury Casino and Hotel.

Echo will however cease the gaming operations at Treasury Hotel and Casino once the new property opens. Those buildings will be turned into shops and premium hotel accommodation, the firm said.

Under the agreement with the state government, the consortium should be awarded a casino licence for a term of 99 years, with an exclusivity clause barring any other casino within 60 kilometres (37.3 miles) of Brisbane’s central business district for a 25-year period from the start of gaming operations at the new casino resort.

The project will be entitled to a total of 2,500 electronic gaming machines. The number of gaming tables – including electronic derivations – will have to be consistent with current Queensland casino licences, according to Monday’s filing.

A piece of legislation pursuant to Queensland’s Casino Control Act 1982 will have to be passed in order to establish an agreement under which a casino licence to Queen’s Wharf Brisbane should be issued, said Echo.

The Australian casino operator will receive a fee from the other partners in return for operating the integrated resort. Echo’s partners will receive fees for any VIP business that they directly refer to the casino.

“It is anticipated that Echo will be entitled to receive approximately 60 percent of the cashflow generated by the integrated resort, taking into account the operator and referral fee arrangements, ownership proportions and any corporate level costs incurred by Echo in relation to the operation of the integrated resort,” the firm said, adding that was based on a forecast relating to the resort’s first 10 years of operations.

On Monday, Echo additionally said its corporate rebranding as The Star Entertainment Group Ltd has now taken effect. Its properties will be rebranded from next year. When the new integrated resort development in Brisbane is completed it will be known as The Star, Brisbane, the firm added.

Pragmatic Play Ltd, a content provider to the iGaming industry, has launched a new slot game called “Monster Superlanche”. The game is played across 6×5 reels, with colourful ‘monsters’... END_OF_DOCUMENT_TOKEN_TO_BE_REPLACED