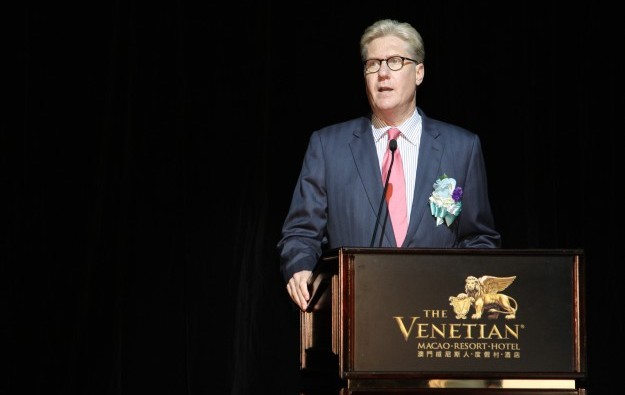 Edward Tracy (pictured), president and chief executive officer of Macau casino operator Sands China Ltd, is to retire with effect from March 6, the firm said on Friday in a filing to the Hong Kong Stock Exchange.

But he is being hired by the company as a consultant with effect from March 7, added the statement.

Mr Tracy served as president and chief operating officer (COO) of the company from July 2010 to July 2011 and served as a special advisor to the Sands China capital expenditure committee from March 2011 to July 2011.

He was appointed to his current role and as a director of the company in July 2011.

“Mr Tracy will continue to work with the senior management team during the transition and consultancy,” said Sands China, adding the executive had confirmed that he has “no disagreement with the board, and there are no matters that need to be brought to the attention of the shareholders of the company in respect of his retirement”.

The filing added that the Sands China board was likely at its meeting on January 23 to hear recommendations from its nomination committee regarding suitable candidates for the CEO role.

“We expect the transition to be smooth and do not expect this news to have any major impact on fundamentals, including the schedule for new projects,” wrote D.S. Kim, a Hong Kong-based investment analyst at JP Morgan Asia Pacific Equity Research, in a note to investors.

The next major project from Sands China is a US$2.7-billion French-themed resort called The Parisian, which will include a scale replica of the Eiffel Tower. In October senior management of Sands’ parent company Las Vegas Sands Corp said the property was likely to have a soft opening – of hotel rooms only – in November or December 2015, and a full opening, including the casino, in March 2016.

Sheldon Adelson, chairman of Las Vegas Sands, said in a statement on Mr Tracy’s departure: “Ed has played an important part in our growth and success in Macau and we will always be grateful for his many contributions. We wish him the very best as he returns to the United States to focus on his family and his health.”

Mr Adelson’s statement added: “Among Ed’s many accomplishments was building a team of senior leaders who will help carry our momentum forward. As we conduct a search for Ed’s replacement, we have every confidence our existing team will be both innovative and efficient in managing our business, while at the same time continuing to support the Macau government and its efforts to become a world centre of leisure and tourism through the development of additional non-gaming attractions and amenities. We remain deeply committed to the future of Macau and the more than 28,000 team members there who are a part of the Sands family.”

Michael Leven – who worked as acting CEO for Sands China for a period prior to Mr Tracy’s 2011 appointment – retired as president and COO of Las Vegas Sands at the end of 2014.

SOFTSWISS Jackpot Aggregator is cooperating with Curaçao-licensed Spinago to launch the latter’s worldwide jackpot campaign for the online gaming sector. The information was given by SOFTSWISS, a... END_OF_DOCUMENT_TOKEN_TO_BE_REPLACED