Electronic game distributor APE to list in HK on Nov 15 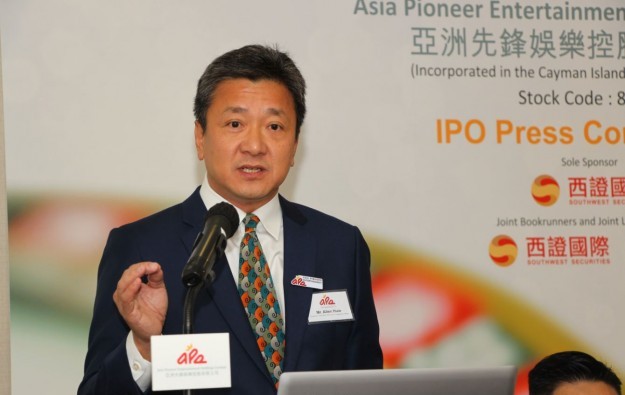 The company said in a media briefing in Hong Kong that some of the money from the offer would be spent on acquiring electronic games from suppliers outside Macau in order to try them out in the Macau market. The suppliers were not identified during the press briefing.

Dealings in Asia Pioneer’s shares on the Hong Kong bourse are expected to commence at 9am on November 15 under the stock code 8400, according to Monday’s briefing.

Among the 250 million shares offered, 25 million are public offer shares and 225 million are placing shares. The price of the shares will be in the range of HKD0.24 to HKD0.36. The public offer will open at 9am on Tuesday and close at 12pm on Friday, with the allotment results announced on November 14. Corporate finance firm Southwest Securities (HK) Capital Ltd will be the sole sponsor of Asia Pioneer’s listing.

“The net proceeds from the share offer, after deducting underwriting commission and estimated expenses in relation to the share offer, are estimated to be approximately HKD50.2 million,” stated a document provided by Asia Pioneer to the media during the Monday press conference.

The company said 43.4 percent and 12.8 percent respectively of the proceeds would be used on “upfront deposits for manufacturers to provide more trial products” and the “procuring and refurbishment of used electronic gaming equipment for resale in Macau to customers who will have Southeast Asia as end markets”.

“The revenue from [refurbished gaming equipment] is still quite small. Currently we see it as a market trend and have yet to come up with a numerical target,” Mr Huie stated.

But he added: “The margin percentage of second-hand machines can be quite high… We hope that we can work on this field more after being listed.”

The Asia Pioneer chairman said regarding new products: “Our suppliers all have new products and games that need trials in markets like Macau. We, for sure, support these new products entering Macau. Therefore, we usually spend some money on deposits for trial products. If it [a product] is successful, then we are going to do the direct sale… The percentage of [successful trials] is very high, almost 100 percent,” he said.

Mr Huie told the media on the sidelines of the press conference: “With more money, we can introduce new types of products. If we have [access] to the capital market, we can then… buy more machines and do more.”

“It will be much quicker for us to expand and go to the next stage,” he added.

Asia Pioneer revealed that part of the proceeds would be spent on “procuring electronic gaming equipment for lease to casino operators in Macau”, as well as “expansion of the sales and marketing and technical team”, and “purchase of tools and equipment and new enterprise resource planning systems”, plus “general working capital” and “relocation of office premises”.

The company’s chief executive and executive director, Herman Ng Man Ho, also revealed that East Timor was one of the potential markets for the company.

A casino cruise brand reportedly controlled by Malaysian entrepreneur Lim Kok Thay is to launch services from Singapore fewer than five months after the Lim family-founded Dream Cruises brand of the... END_OF_DOCUMENT_TOKEN_TO_BE_REPLACED