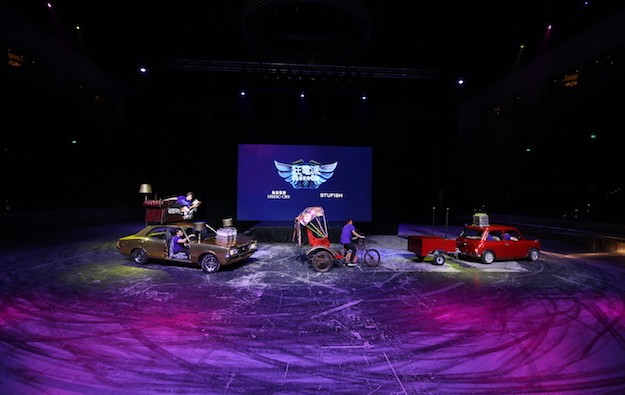 A new stunt-based show that had been due to launch at Macau casino resort Studio City this month has been postponed to late January because it required “further development”, the property’s promoter Melco Resorts and Entertainment Ltd said in an email to GGRAsia in response to an enquiry. The “Elēkrŏn” spectacle (pictured) is being developed in collaboration with United Kingdom-based entertainment brand Stufish.

“Balancing thrills with safety is a demanding and exacting process, and must not be rushed. As such, we have taken the decision to undertake further development with our cast, crew and technical advisors,” a Melco Resorts spokesperson told us. “The result will be spectacular and worth waiting for,” the person claimed.

Melco Resorts had announced to the media in October that Elēkrŏn was to run from December 14 to March 31, 2019. The new launch date for the show is January 24, 2019, the firm told GGRAsia. It did not clarify whether the run of the show would be extended beyond March 31 to make up for the delayed launch.

It is the second time in recent months that a major new in-house show at a Macau casino resort has been delayed. In October the chief executive of MGM China Holdings Ltd confirmed to us that “Destiny”, one of two resident shows that had been planned for the MGM Cotai resort – a facility that opened in  February – would not be going ahead imminently. He added that the show – as had been conceived – might not go ahead at all, and that whatever the content, such a resident show was unlikely to be ready in time for Chinese New Year, which in 2019 falls on February 5.

Studio City’s Elēkrŏn was described in a previous announcement as a 75-minute “non-stop performance”, with more than 150 people involved in its production. It has been due to feature more than 70 custom-made vehicles, “all engaged in a succession of daredevil feats that take place at super close range to the audience”.

In its email to us, Melco Resorts asserted the firm was a specialist at “pioneering” entertainment spectacles. “Elēkrŏn will push new boundaries of both technological and human performance,” the Melco Resorts spokesperson said.

Universal Entertainment Corp said in a Wednesday statement it hoped to get the Okada Manila casino operation listed in the United States even before a new September 30 deadline agreed with 26 Capital... END_OF_DOCUMENT_TOKEN_TO_BE_REPLACED