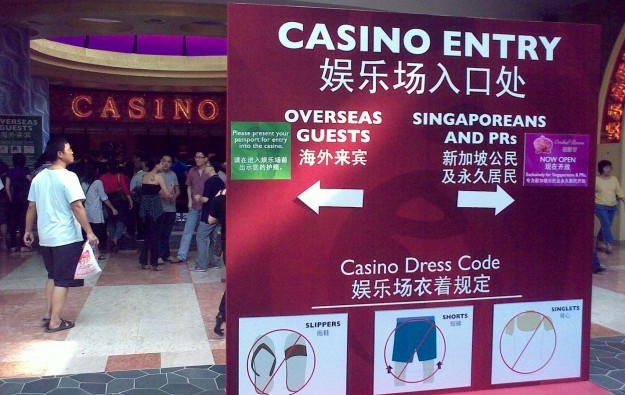 An entry levy could be imposed on foreigners as well as locals were casinos to be legalised in Japan it emerged on Wednesday.

The idea was raised in a two-hour discussion of the IR [Integrated Resorts] Bill by the Cabinet Committee of Japan’s lower house of parliament, according to Mike Tanji, an executive advisor to Tokyo-based Gaming Capital Management.

GGRAsia has obtained a note of the main topics discussed. It was compiled from observations of some of those attending. In it, lawmakers give the clearest indication yet that they are interested in having foreign casino operators involved in IRs.

A number of pachinko machine makers and pachinko hall operators have also said they would like to be involved as equity partners.

At Wednesday’s meeting the parliamentarians also indicated it is still theoretically possible for casinos to open in time to coincide with Tokyo’s 2020 Summer Olympics.

However, “online casino gaming is not expected to be included to the IR Bill,” stated the discussion notes obtained by GGR Asia.

Lawmakers additionally said that the so-called ‘Singapore model’ for casino regulation would be preferred. They added that the capital investment required for any regional casino resort was likely to be significantly lower than that required for major cities such as Tokyo or Osaka. Several foreign casino operators have mentioned investment of up to US$10 billion for each big-city resort.

An entry levy for foreigners as well as locals in any Japan casino resorts would however be a major deviation from Singapore’s approach to casino regulation. Singapore imposes on Singapore citizens and permanent residents a statutory entry levy (pictured) of either S$100 (US$80) for 24-hour access, or S$2,000 for a year’s entry but is content to give foreigners free access.

The Singapore government has described its locals’ levy measure as a social safeguard to prevent the poor from gambling. There is however currently a debate in the Lion City about the efficacy of the existing entry fee.

Singapore legalised casino resorts in 2005 after a ban on casino gambling stretching back to British colonial times in the 1920s. The aim of the about-face was to boost employment, tourism spending and the gross domestic product of the city-state.

But Singapore has demonstrated a willingness to introduce incremental changes to its gaming regulations and responsible gambling rules post-issue of casino licences in order to protect consumers and in particular its own citizens. It includes a toughening of Section 54 of the Casino Control Act. As amended in late 2012 it says that operators can be fined up to ten percent of annual gross gaming revenue for a “serious breach” of the act, without defining what counts as “serious”.

Japanese lawmakers have previously indicated that some or all of the money raised from an entry levy in that country could be used for responsible gambling initiatives.

Another point of note in this very early stage of formal discussion on Japan’s IR Bill is that at least some lawmakers seem sympathetic to the idea that pachinko machines could be operated in casino resorts. According to the note of the committee’s discussion, that could happen without the need for pachinko to be subjected to fresh regulation.

Pachinko is currently regulated in an addendum to Japan’s Adult Entertainment Business Law as a speculative pastime, and supervised by the National Police Agency. Some experts in gaming law, including Ronald Morse, a former professor at University of Nevada, Las Vegas have previously suggested that were casinos to be legalised in Japan, pachinko might need to be redesignated and freshly-regulated as a gambling activity.

GGRAsia reported on May 30 that Japan’s main opposition party, the Democratic Party of Japan (DPJ), had reached an agreement with the governing LDP for committee-level discussions on the bill during the current parliamentary session.

That does not mean however that the bill can be passed through both houses of the Diet before the official ending on Sunday of the current parliamentary session. It’s likely to be the autumn at the earliest, before the upper house – the House of Councillors – debates the topic.

The imminent return of package tours from mainland China will not only help boost Macau’s tourism businesses, but is also expected to help casinos gain more foot traffic in their mass gaming... END_OF_DOCUMENT_TOKEN_TO_BE_REPLACED