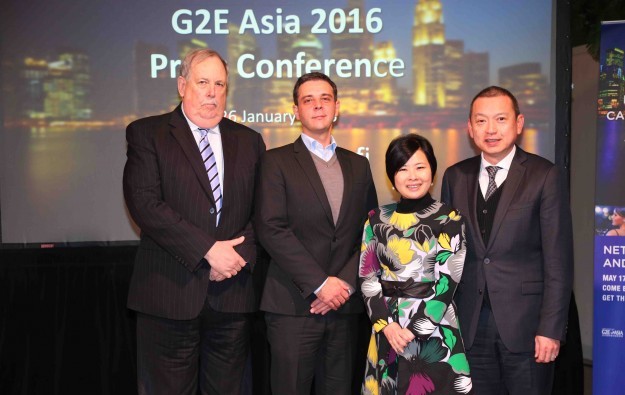 One of the organisers of Global Gaming Expo (G2E) Asia, an annual casino industry trade show and conference held in Macau, has announced the line-up of activities for 2016, the 10th edition of the event.

Reed Exhibitions also disclosed that so far 180 exhibitors have been confirmed, a 12 percent increase on last year’s show. A quarter of the 2016 exhibitors will be new to the show, the firm added.

Josephine Lee (pictured centre, right), executive vice president of Reed Exhibitions Greater China, told GGRAsia – at a daytime press conference held on Tuesday at Pacha, a nightclub at the recently opened Studio City casino resort in Macau – that some of the new features at G2E Asia 2016 would seek to address the regional casino industry’s shift from an emphasis on VIP business to one of serving mass-market customers.

“That includes how to address the new group of mass-market travellers. This is not just a question in Macau but for operators across the region,” she added.

He said his institution expected modest growth this year in casino gross gaming revenue in Macau – the dominant regional market – with further improvement in 2017.

“We think 2016 will be a year of stabilisation, and we expect revenues to grow by 1 percent, with the VIP [segment] declining by 8 percent and the mass market growing by 10 percent. And we are more positive on 2017, where we think the growth rate will be 12 percent,” said Mr Fischer.

Casino suppliers and operators in Asia have been closely looking at their costs during the current regional downturn in gaming revenue. Some have privately mentioned potential cuts in spending related to attending and exhibiting at trade shows.

GGRAsia asked Ms Lee for her reaction to the announcement in December by Austria-based gaming equipment maker Novomatic AG that over the next three years it would attend only one of the two gaming trade shows held annually in Macau. The firm had said in a release it had decided to commit itself to the other event, the Macao Gaming Show, held in November and organised by the Macau Gaming Equipment Manufacturers Association.

Ms Lee told us: “We don’t know about that. That may not be final. Novomatic is a very big company. They also have other businesses that we are talking to right now; especially [covering] lottery, gaming content.”

The new features for G2E Asia 2016 include the Macau Retail Summit, which will look at customer service and technology as ways to improve retailing of non-gaming products and services in the Macau market.

Vincent Tung (pictured right), chairman of the council board at the Macao International Brand Enterprise Commercial Association said during the press conference that the retail summit “will look at how [retailers] can collaborate, unite and build a voice to [put] to the government.”

He added: “Gaming revenue [in Macau] is slumping and at the same time the luxury retail is also slumping… but on the other hand the local SMEs’ [small- and medium-sized enterprises’] business is growing… and the middle class visitor [numbers] are growing.”

Another new feature for G2E Asia in 2016 will be what is described as the Asia Gaming White Paper, a document produced in collaboration with CLSA that will be presented during the event. It is said to include projections of future trends for casinos in major Asia-Pacific markets.

Returning elements at the 2016 expo include what Reed Exhibitions describes as a “highly targeted” business matching service, which the company branded in a Tuesday press release as the ‘IT and Business Solutions One2One Event’.

The iGaming Zone, for suppliers of online gaming products and services, will also be back. Reed Exhibitions said there would be double the number of exhibitors this year, with half of the exhibitors being new to the event.

The Macau Pavilion, first introduced at the 2014 edition, will also be there in 2016, highlighting gaming and entertainment offers in the host city.

The All Asia Dealers Championship, organised by Asia Gaming Brief and G2E Asia and launched at last year’s edition, returns for 2016. The contest of casino dealers’ skills is described as a chance for front line staff at some of Asia’s major casinos to meet and learn from each other while competing under conditions designed to simulate the normal working environment.

Luis Pereira (pictured centre, left), managing director and co-founder of Asia Gaming Brief said: “The championship was developed as a platform to celebrate the dealers’ skills and achievements. They are the front line of the industry, and they need to know that the industry is here to support them.”

This year will also see the inauguration of the Asia Gaming Awards, jointly organised by Asia Gaming Brief and The Innovation Group, a provider of consulting and management services to the gaming industry and other leisure sectors.

The awards are said to be open to operators, regulators, suppliers and service providers that have made outstanding contributions to the land-based and online casino industries. The awards will also recognise up to 18 young gaming executives from Asia based on their talent and potential to shape the industry in the coming years. The awards dinner takes place at G2E Asia 2016.

The organising committee for the awards is headed by David Green (pictured left), an Australian lawyer and former gaming regulator, who has advised governments – including the Macau government – on gaming regulatory policy.

Mr Green said: “My first task really is to put together a judging panel which will be identified and recognised as appropriate, independent and fair minded, as well as having inside knowledge and detailed knowledge of this industry.”

Mr Green, principal of Newpage Consulting Ltd, added: “I think the emphasis [of the awards] has got to be on outstanding achievement. So if… awards [are] not deserved in a year, because of failure to meet the criteria, then none will be awarded.”

Reed Exhibitions also gave an update during Tuesday’s press conference of some of the final statistics for last year’s edition of the expo.