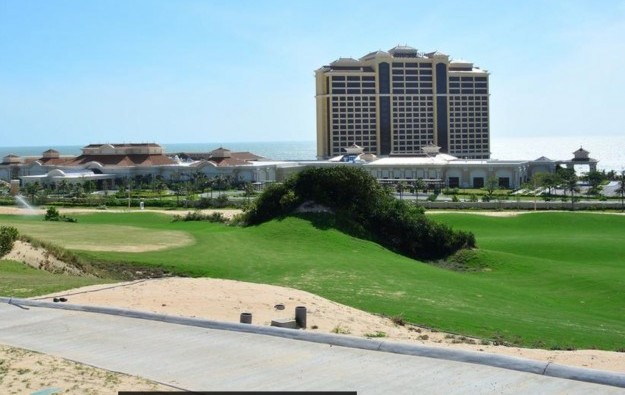 The main investor in the Ho Tram Strip casino resort (pictured) in Vietnam has announced what is described as its second US$50-million capital injection in the development over the past 14 months.

The cash represents the second tranche of a total of US$100 million in fresh capital committed to the project by the main backer, Harbinger Capital Partners LLC, said Matthew Underwood, a spokesman for the Ho Tram Strip, in a telephone call with GGRAsia on Monday.

A press release on Friday from Asian Coast Development (Canada) Ltd, the company owning the Ho Tram Strip, said the US$50 million would be spent on several projects, including: the development – currently under way – of a second tower; some villas and luxury condominiums; the development of additional leisure amenities; and on the Ho Tram Open golf tournament, to be held in early December.

Mr Underwood said a firm completion date for the second hotel tower was still to be announced.

The quality of facilities at the Ho Tram Strip means it “serves as a driver for the development of Vietnam as a must-visit destination for international travellers,” said Philip Falcone, founder and principal of Harbinger Capital, in prepared comments in the press release.

Prior to the first phase opening of the Ho Tram Strip in July 2013 – with 541 five-star rooms and permission for up to 90 tables – the Vietnamese casino market consisted of small- and medium-sized properties mostly in the north and close to the land border with mainland China. The Ho Tram Strip is a beachside resort 120 kilometres (75 miles) southeast of Ho Chi Minh City, the country’s main southern city formerly known as Saigon.

“The total investment in Ho Tram Strip is now approaching nearly US$1 billion of the US$4.2 billion planned for the 2.2-kilometre beachfront development,” stated Friday’s press release.

Colin Pine, general director of Ho Tram Project Co Ltd, a company that holds the investment certificate for Ho Tram issued by the Vietnamese government, told GGRAsia in an interview in May that approximately US$700 million had been spent on the casino project as of that date.

Mr Underwood clarified on Monday that when working capital for the Ho Tram Strip is included in the calculations as well as capital costs, the total invested is close to the US$1 billion figure mentioned on Friday.

Vietnam currently bars its own citizens from gambling in the country’s casinos. But Mr Pine told GGRAsia in an interview in October last year that the Ho Tram Strip’s casino was “a good candidate” for any pilot scheme allowing locals to gamble.

Vietnam media outlets reported in August last year that the country’s Ministry of Finance had completed a draft decree that could allow Vietnamese nationals to gamble in casinos at home.

According to the reports, under the proposed decree, some casinos might be allowed to open their doors to Vietnamese nationals aged 21 and over, provided the customers met certain background and financial criteria that the government would define at a later date.

On Friday, Asian Coast Development confirmed in a second press release that Michael Kelly, the firm’s new executive chairman, had taken up his post. Mr Underwood said he had been on site since late September.

Mr Kelly was quoted saying: “I am very excited to be taking over the leadership of the Ho Tram Strip. We have a tremendous property with the only beachfront integrated resort in Asia… Together with The Bluffs, our championship golf course, we have been steadily gathering international accolades. The Bluffs will host some of the biggest names in world golf on Asia’s grandest stage at the US$1.5-million Ho Tram Open in early December.”

Macau recorded 69,279 visitor arrivals on the sixth day of the Chinese New Year (CNY) holiday period, showed official data. The city welcomed about 384,600 visitors in the first six days of the... END_OF_DOCUMENT_TOKEN_TO_BE_REPLACED