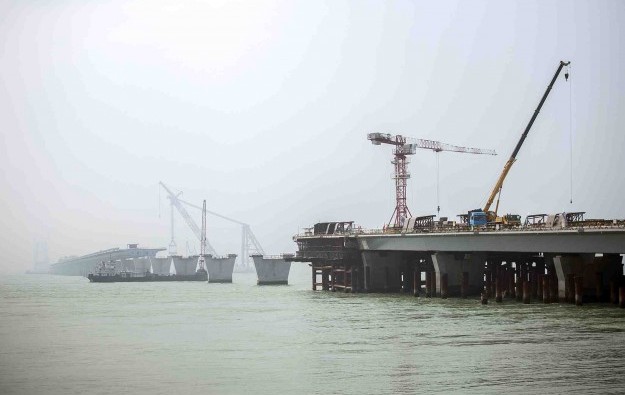 Seven piles for the under-construction Hong Kong-Zhuhai-Macau Bridge will have to be reconstructed, causing further delays to the project, reported an English language website of the Hong Kong Economic Journal, citing Hong Kong newspaper Apple Daily as the source.

The original report of the latter Chinese language news outlet quoted sources as expressing doubts on whether the Hong Kong portion of the project could be completed in 2017 as currently estimated by some official sources. Apple Daily also quoted sources saying that hundreds of piles – along with the bridge piers and surface – have yet to be built.

A number of investment analysts have cited the completion of the bridge (pictured in a file photo) as an important factor in the story of the ongoing development of Macau’s casino industry. That is on the basis that it will better connect the city to Hong Kong International Airport, a major regional transport hub. Currently most people travel from Hong Kong to Macau via ferry, a journey taking about an hour. Attempting to travel by road from Hong Kong International Airport to Macau would currently involve a  journey of several hours and mean driving along the mainland China coast.

In a September report, brokerage CLSA Ltd said that for Macau bound visitors the bridge would cut “transport time to and from Hong Kong International Airport in half”. CLSA estimated in its paper that the bridge project would be open by 2018. In late November, Hong Kong’s Highways Department forecast the Hong Kong portion of the scheme would be “completed by end-2017”.

A local contractor, which had already manufactured more than 1,000 of the piles used to anchor the structure to the seafloor of the Pearl River Delta, will have to bear the cost of reconstructing seven of them, the Highways Department of Hong Kong confirmed to local English newspaper the Standard.

The Highways Department did not say why or identify the contractors involved, or say what parts of the bridge were affected.

Sources quoted by Apple Daily additionally said one of the seven problematic piles was located at an artificial island for immigration clearance on the Hong Kong side.

The Finance Committee of Hong Kong’s Legislative Council in January approved an extra funding of HKD5.4 billion (US$693.8 million) for the bridge linking Hong Kong, Zhuhai and Macau. In November, the capital expenditure for the whole scheme was estimated at HKD133 billion, according to a report by newspaper South China Morning Post. The costs will be split between Hong Kong, Macau and mainland authorities.

International casino operator Las Vegas Sands Corp has been ranked as the most sustainable firm in the global casino sector, according to the 2023 edition of the S&P Global Sustainability... END_OF_DOCUMENT_TOKEN_TO_BE_REPLACED