Fire at Galaxy Macau unlikely to cause delays: DB 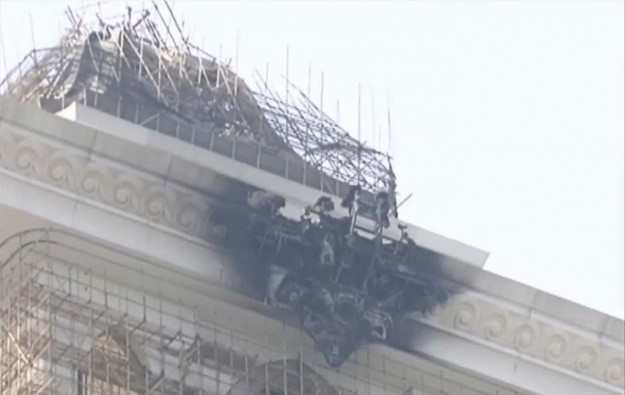 More than 6,000 workers were reportedly evacuated when fire broke out on Thursday morning at an under-construction building at the Galaxy Macau casino resort. The seat of the fire (pictured in a video still from Macau public broadcaster TDM) was in the area around a cupola on a new hotel tower.

The blaze started in the roof area of a yet-to-be completed 36-storey building at Galaxy Macau Phase 2 at about 11am when workers were carrying out welding work, but was put out shortly before 12.30pm according to Macau’s fire service.

Karen Tang of Deutsche Bank AG in Hong Kong said in a note on Thursday that the fire is unlikely to cause any delay to the opening of Galaxy Macau Phase 2.

“From our observations, the fire was confined to the rooftop of the hotel tower under construction, and some of the outer walls on the top 2-3 floors were blackened,” said Ms Tang.

“As the main structure of the building, including the gaming floor, most part of the hotel tower and retail podium, seemed not affected, we believe today’s fire will not cause delay for the opening of Galaxy Macau Phase 2,” she added.

Galaxy Macau Phase 2 is likely to open in mid-2015 according to previous statements by the developer Galaxy Entertainment Group Ltd.

Phone calls to Galaxy Entertainment by GGRAsia seeking clarification and more information had not been returned by the time this story was updated.

Ms Tang however highlighted the risk of the Macau government asking for construction to be halted for safety standard checks. “But previous cases suggest this is only likely when someone was injured,” she added.

Most of Macau’s casino operators are likely to generate positive free cash flow in the first quarter, given the robust recovery level of mass-market gross gaming revenue (GGR) in January, relative... END_OF_DOCUMENT_TOKEN_TO_BE_REPLACED