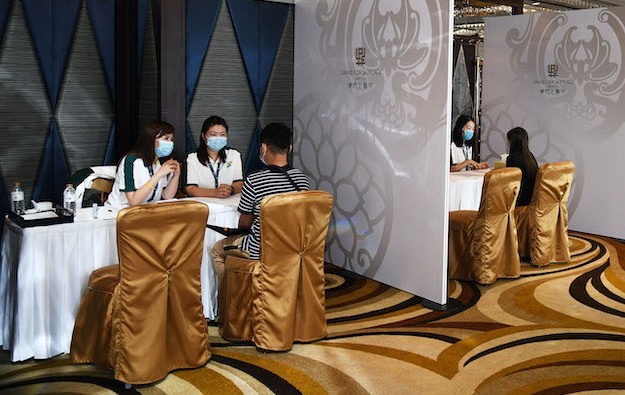 The first major event to recruit general staff for the new, HKD39-billion (US$5 billion), Grand Lisboa Palace casino resort in the Cotai district of Macau, took place from August 21 to 23 inclusive, according to a Monday press release.

In late July, SJM Holdings said in its interim results that the group was  “working closely” with the Macau government to complete the procedures to open Grand Lisboa Palace. Monday’s release reiterated the hotel portion of the new complex would have 1,900 rooms and suites.

The July filing to the Hong Kong Stock Exchange said that “subject to obtaining the necessary operating permits, the project is expected to open by the end of 2020”.

The release did not mention how many new jobs would be created at Grand Lisboa Palace, or whether any of the group’s staff would be reassigned there from existing properties, as occurred when a number of other operators with Macau peninsula flagships opened a new property on Cotai.

Fresh graduates from local tertiary-education institutions were invited to participate in the gathering.

In line with the Macau government’s advice on limiting the size and scope of public gatherings during the Covid-19 pandemic, all job interviews at the recruitment event were organised in advance, by time slot.

Daisy Ho Chiu Fung, chairman of SJM Holdings, was quoted in the release as saying the group gave “priority to recruiting local talent for job openings,” and was “dedicated to promoting career advancement for local employees”.

The Macau government has a policy of encouraging its six casino licensees to enhance the career and promotion opportunities of Macau ID holders, and minimise the amount of imported, i.e., non-resident, labour that they use.

A plan to cap the number of gaming chips in circulation in the Macau market is to ensure industry liquidity in the event depositors seek to withdraw funds en masse, say a number of industry experts... END_OF_DOCUMENT_TOKEN_TO_BE_REPLACED