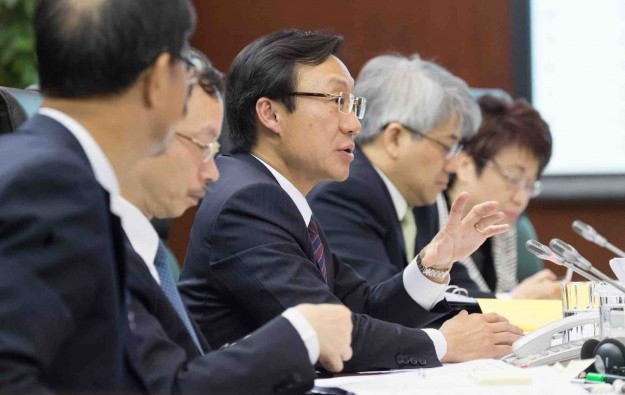 A first-reading vote by Macau’s Legislative Assembly on a bill proposing a full smoking ban inside the city’s casinos has been postponed to Friday (July 10). That was after lawmakers were unable to complete a debate on the government-backed proposal within the allotted time on Thursday.

The bill was the last of three measures set to be debated and voted upon on that day.The schedule left lawmakers with about two hours to discuss the matter.

Friday’s vote was briefly under question however because of the approach of the first tropical cyclone of the summer season, Typhoon Linfa. The Macao Meteorological and Geophysical Bureau raised the Typhoon No 3 signal on Thursday afternoon, but had lowered all signals by 4.am local time on Friday.

The latest weather reports showed Typhoon Linfa had already been downgraded to a severe tropical storm after it made landfall in the neighboring Guangdong province, in mainland China.

During Thursday’s debate on the full casino smoking ban bill, Macau’s Secretary for Social Affairs and Culture, Alexis Tam Chon Weng – who oversees smoking control policies – said that to allow the retention of smoking lounges inside casinos – as advocated by casino operators and some legislators – would not allow for a proper control of secondhand smoke.

Mr Tam also pointed out that casinos were among the few public spaces in Macau where it was still possible to smoke. Smoking has already been banned from restaurants, bars, nightclubs and saunas.

The tobacco control bill includes provisions to outlaw smoking lounges on casino mass floors as well as smoking in VIP rooms. It also bans the sale of tobacco-related products in casinos.

During Thursday’s debate on the tobacco control bill, several legislators said they supported the government’s smoking control measures but believed that maintaining smoking lounges in casinos could be an alternative to the full smoking ban. The latter measure could lead to sharper declines in gaming revenue than currently seen, some warned

Not allowing smoking lounges in casinos, both in VIP and mass areas, “will lead to even greater revenue drops in the gaming sector,” lawmaker Zheng Anting stated, labelling the proposal as “a radical move”. Mr Anting urged the government to find “a compromise” in order to safeguard both the health of casino workers and the health of Macau’s gaming-focused economy. The legislator has attended recent meetings at which the junket sector lobbied government officials to allow the continuation of smoking in VIP rooms.

Some legislators urged the government to re-examine the ‘no smoking lounge’ policy during the committee stage of the bill approval procedure.

Any bill presented to the Macau Legislative Assembly receives its first reading in a plenary session, i.e., a full sitting of the legislature. If given a first-reading approval, it is then assigned to one of three working committees for detailed examination. After the committee has issued a report on the bill, it returns to the full assembly for its second and final reading.

The committee stage is the lengthiest part of the passage of a bill in Macau. Each committee responsible for scrutinising legislation has 10 or 11 legislators and meets behind closed doors. Usually, representatives of the government are required to attend some meetings to answer questions on the bill. It is common for the government to introduce amendments to its bills during this stage, upon suggestions from the working committee members.

There were some legislators also supporting the full casino smoking ban during Thursday’s debate. Ng Kuok Cheong stated that the government should have introduced the full ban earlier. “But it is better late than never,” he added.

Legislator Ella Lei Cheng I, from the influential Macau Federation of Trade Unions, the city’s largest labour platform, also showed her support for the bill. “Workers must have a healthy working environment,” she said.

Ms Lei recalled that, according to the 2011 Tobacco Control Act, casinos were allowed to have smoking areas with gaming. The smoking ban and introduction of smoking lounges on mass floors only happened last year, as several casinos were unable to enforce proper air quality standards in their casino smoking areas, she added.

Macau’s health authorities said on Sunday that they would require all people wishing to enter the city’s casinos not only to have their body temperature measured and to display a... END_OF_DOCUMENT_TOKEN_TO_BE_REPLACED