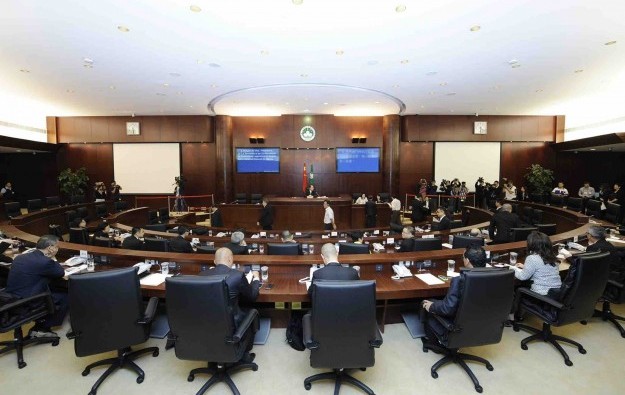 Macau’s Legislative Assembly (pictured) is scheduled to hold on Thursday a first-reading debate and vote on a government-backed bill proposing a full smoking ban inside the city’s casinos. A ‘yes’ vote that day would not mean immediate implementation of the policy.

The bill is the last of three measures to be voted upon on Thursday, according to the official website of the Legislative Assembly. If lawmakers are unable to finish their discussions within the allotted time on that day, the vote will be postponed to another day.

The new tobacco control bill includes provisions to outlaw smoking lounges on casino mass floors as well as smoking in VIP rooms. The draft bill does not include a proposed enactment date. Macau officials have been quoted saying implementation is not likely to happen until early next year.

Any bill presented to the Macau Legislative Assembly receives its first reading in a plenary session, i.e., a full sitting of the legislature. If given a first-reading approval, it is then assigned to one of three working committees for detailed examination. After the committee has issued a report on the bill, it returns to the full assembly for its second and final reading.

The committee stage is the lengthiest part of the passage of a bill in Macau. There are precedents in Macau for the committee phase being skipped, but that would typically only happen in what are regarded as exceptional cases. Examples could be an increase to a particular existing tax or minor amendments to an existing law.

In Macau, each committee responsible for scrutinising legislation has 10 or 11 legislators and meets behind closed doors. Usually, representatives of the government are required to attend some meetings to answer questions on the bill. The government is also required to add any potential amendments that emerge during this stage.

At least five of Macau’s 33 lawmakers have direct or indirect links to the casino industry. Among them is Angela Leong On Kei, an executive director of gaming operator SJM Holdings Ltd.

Macau’s six casino operators have repeatedly asked to be allowed to keep smoking lounges in their venues if a full tobacco ban is approved. Investment analysts have said removing mass floor smoking lounges could shave 10 percent from mass market gaming revenue, and a VIP room smoking ban as much as 15 percent from VIP revenue.

Macau casino operator MGM China Holdings Ltd had a “record” market share in January, and its venues were the “highest-earning businesses” in the portfolio of the majority owner MGM Resorts... END_OF_DOCUMENT_TOKEN_TO_BE_REPLACED