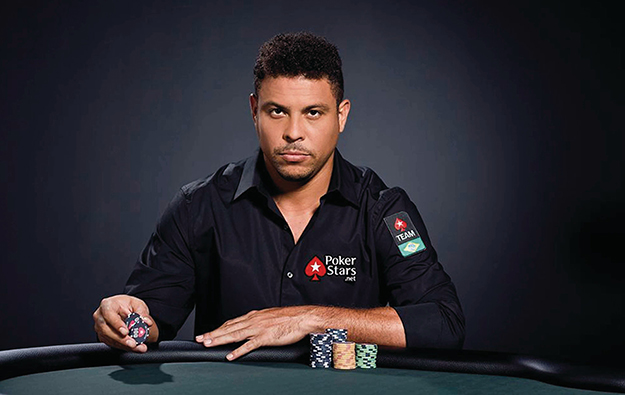 Former soccer star Ronaldo is joining the 2015 Asia Championship of Poker, the Season 9 finale for the Asia Pacific Poker Tour.

The competition is promoted by online poker brand PokerStars and is taking place at ‘PokerStars LIVE at the City of Dreams’, a branded venue at Melco Crown Entertainment Ltd’s City of Dreams casino resort on Cotai, Macau.

“Poker gives me a new challenge in life and I am very glad to compete in Asia where the game is now booming,” the Brazilian football legend – who won two World Cups and three World Player of the Year titles – said in a statement.

Ronaldo, a PokerStars brand ambassador and poker player himself, in January came in 26th in the 2015 PokerStars Caribbean Adventure Main Event, in the Bahamas.

The Asia Championship of Poker, scheduled to end on Sunday, includes a HKD100,000 (US$13,000) buy-in main event. It is dubbed by PokerStars as “the largest poker festival in Asia”.

Last year, the Asia Championship of Poker attracted nearly 3,000 entrants and awarded more than HKD116 million in prize money, according to a release from PokerStars. This year’s event is expected to surpass those numbers with 23 tournaments scheduled over the 17-day series, stated the release.

In May, PokerStars announced it had recruited Portuguese footballer Cristiano Ronaldo and Brazilian soccer international Neymar Jr as brand ambassadors.

Canada-based Amaya Gaming Group Inc announced in June last year it was acquiring PokerStars in a US$4.9 billion leveraged deal.