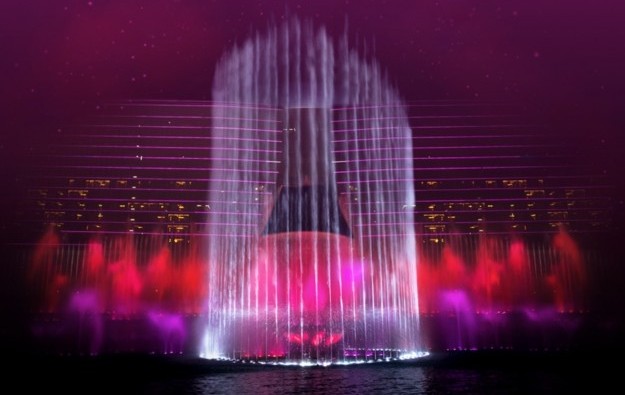 Shops and five food and drink outlets were launched on Friday at Philippine casino resort Okada Manila, along with a large fountain (pictured) at the heart of the property.

Approximately 10 shops, including an outlet of hi-fi electronics brand Bang & Olufsen, and one for the Ray-Ban sunglass brand, were opened that day. The food and drink outlets premiered on Friday included a lobby lounge, a buffet restaurant and two Japanese-themed eateries.

The news was given on the website of the resort’s promoter, Tiger Resort, Leisure and Entertainment Inc, a firm controlled by Japanese entrepreneur Kazuo Okada. The website also confirmed that a hotel facility at the resort was accepting bookings. It did not clarify how many rooms were currently available. The project’s design calls for a two-wing hotel with 993 rooms.

Okada Manila, slated as a multi-phase US$2.4-billion scheme, had a soft opening – referred to by the venue’s promoter as a “preview period” – on December 21, without any hotel accommodation being in operation. Okada Manila officially launched its casino operations on December 30.

At Friday’s event, described as the “Grand Fountain Unveiling”, there were performances by American singer Robin Thicke and local star Gerphil Flores, and an appearance by the German-Filipina model Pia Wurtzbach, who was Miss Universe 2016. Okada Manila was a partner of last year’s edition of the beauty pageant according to local media reports, and hosted on January 30 the after-party of the 2017 event.

Okada Manila is said to have space for up to 500 gaming tables and 3,000 electronic gaming machines, according to the scheme’s promoter.

China has moved one step closer towards reopening, by relaxing some its Covid-19 control measures, with most infected people now able to quarantine at home rather than in state-sanctioned... END_OF_DOCUMENT_TOKEN_TO_BE_REPLACED