Full smoking ban in Macau casinos to go ahead: govt 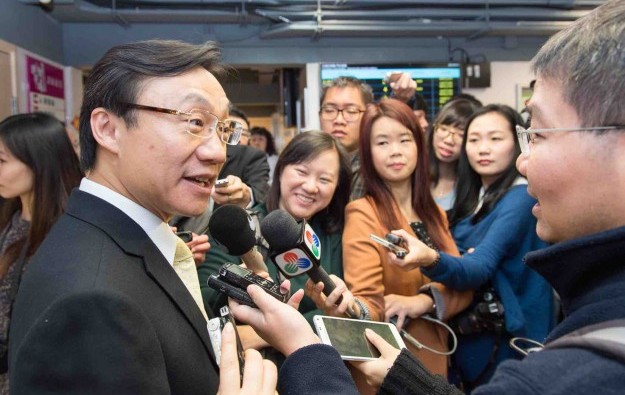 Despite the opposition of casino operators, the Macau government still plans to push ahead with a complete smoking ban in the city’s casinos, Secretary for Social Affairs and Culture, Alexis Tam Chon Weng (pictured), told reporters at the weekend.

Mr Tam again suggested that the smoking ban is not directly correlated to the slump in gaming revenue, saying that VIP revenue has been the segment falling the most despite gamblers being allowed to smoke within VIP rooms.

The vice chairman of Galaxy Entertainment Group Ltd, Francis Lui Yiu Tung, last week warned that preventing some patrons from smoking meant “there will be huge losses” for Macau’s casino industry. He added that that the six local operators were “working together” to propose alternatives to a complete ban, although he didn’t specify what they were.

Some junket promoters have also recently stated that a full smoking ban inside casinos would worsen the gaming revenue decline.

Beijing’s new rules ban smoking in all public spaces like restaurants, offices and public transport throughout the capital city.

“Interestingly, and unfortunately for Macau’s casino operators, this new ban also applies to the smoking lounges at the capital’s airport and train stations,” the two analysts wrote in note on Monday.

They added: “While we would like to see a compromise reached that would allow for smoking lounges to remain within casinos, Beijing’s tough stance on smoking could provide the Macau government with enough political cover to carry out their plans for a full smoking ban.”

The Macau government has appeared to rule out the possibility of keeping smoking lounges on Macau casino mass-market floors.

Union Gaming said “while other casino markets have experienced double-digit declines in GGR upon the implementation of smoking bans… the effect in Macau is likely to be more modest – although still quite real.”

According to Mr Govertsen and Ms Chiang, the need to smoke will however likely interrupt the “cadence of game play” for some customers; i.e., the rhythm of their gambling activity, which could result in lower GGR across all gaming segments.

They added: “Note that GGR at the convenience-oriented Mocha Clubs [owned by gaming operator Melco Crown Entertainment Ltd], which have been smoke-free since last October, has declined 15 percent and 12 percent in 4Q14 and 1Q15, respectively. We would attribute these declines almost entirely to the elimination of smoking.”

The imminent return of package tours from mainland China will not only help boost Macau’s tourism businesses, but is also expected to help casinos gain more foot traffic in their mass gaming... END_OF_DOCUMENT_TOKEN_TO_BE_REPLACED