G2E 2014 on course for big attendance 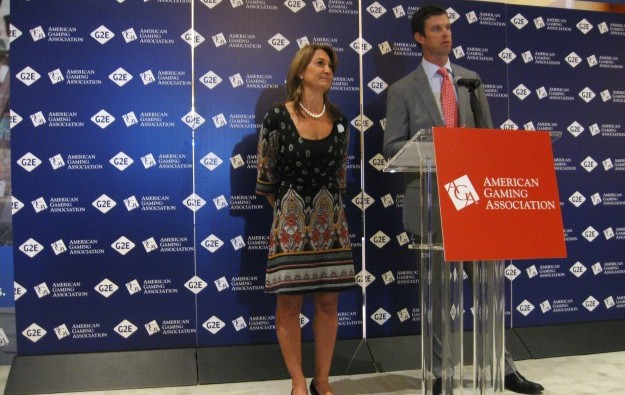 The total number of people exhibiting at and visiting this year’s Global Gaming Expo (G2E) could at least match last year’s record numbers. That’s based on the rate of pre-registration, one of the two co-organisers said on Monday.

In conference industry jargon, the combined number of attendees and exhibitors is known as the “buyers”.

“Last year we had 26,000 buyers. This year we are tracking 4 percent ahead [of this time last year] in pre-registration,” Nancy Walsh (pictured, left), president, North America, for Reed Exhibitions said at a preview press conference in Las Vegas.

The event, comprising seminars and a trade show for gaming industry suppliers, allied industries and this year also online gaming providers, runs from Tuesday to October 2 at the Sands Expo and Convention Center on the Las Vegas Strip.

Other innovations this year include one- or two-day passes for those that wish to sample the event rather than attend all three days; sections for the hospitality and food and beverage sectors to reflect the growing global influence of the so-called integrated resort model for casino properties; and guides “every couple of hundred feet” with ‘Ask me’ signs, to help people navigate, said Ms Walsh.

Ron Rosenbaum (pictured, right), chief operating officer of the show’s other organiser, the American Gaming Association, said that on Tuesday Las Vegas time, the first day of the trade exhibition, Geoff Freeman president and chief executive of the association “will make a major announcement…that highlights just how many jobs our industry supports”.

Singapore has the potential to be a “top choice” for Chinese outbound travellers, once the country reopens and eases travel restrictions associated with the Covid-19 pandemic, suggested... END_OF_DOCUMENT_TOKEN_TO_BE_REPLACED