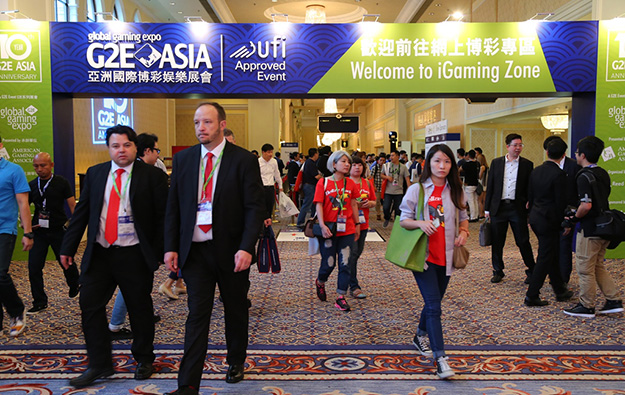 All the major suppliers to the Asia-Pacific casino industry will be represented on the show floor, according to the organisers. The doors to the exhibition open to the public at 11am on Tuesday.

The organisers stated that 180 exhibitors have been confirmed for this year’s edition of G2E Asia. They noted that nearly one-third of the exhibitors are newcomers to the event. The 2017 edition will cover more than 12,000 square metres (129,167 sq feet) of exhibition space.

The organisers expect 12,000 visitors to G2E Asia 2017. One new feature for 2017 is live updates, broadcast on-site, of the 10 products most frequently scanned by show visitors via the QR code reader available on the event’s smartphone app.

On Wednesday at 9.30pm, there will be an executive roundtable where participants will discuss the content and amenities for the Macau mass market. Later in the day, at 2.15pm, Paulo Martins Chan, director of Macau’s casino regulator, the Gaming Inspection and Coordination Bureau, will deliver a keynote speech.

On Thursday, the conference section of G2E Asia 2017 will be dedicated to online gaming products and services, a segment referred to at the event as “iGaming”.

The organisers of G2E Asia said they have teamed up with Lex Mundi, a worldwide network of independent law firms, to launch a ‘Global Gaming Legal Guide’. Covering over 20 gaming jurisdictions, “the guide seeks to update gaming companies about legal developments that may impact their business operations, compliance and reputational risk,” stated the organisers. The publication – covering six key areas of law – will see its inaugural launch at this year’s event.

It is likely that Macau will shortly have a third round of citywide centre-based Covid-19 testing in little more than a week, after the results so far of a second mass test – that was due to finish... END_OF_DOCUMENT_TOKEN_TO_BE_REPLACED