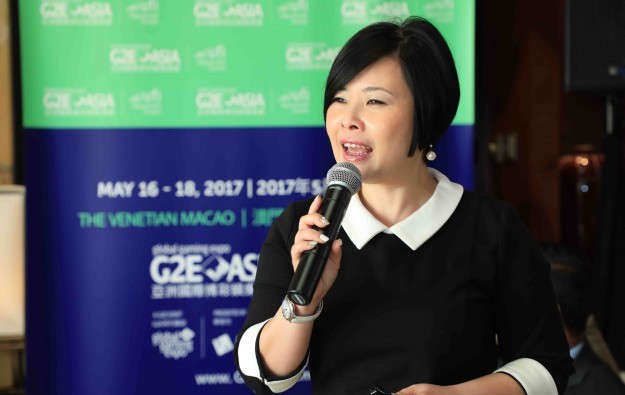 Global Gaming Expo (G2E) Asia, a casino industry trade exhibition and conference held annually in Macau, is to be approximately one-third bigger in size for its 2017 edition compared to 2016.

“For the first time we will be using all three exhibition halls at the Venetian Macao,” said Josephine Lee (pictured), executive vice president of Reed Exhibitions Greater China, in comments to GGRAsia.

She was speaking on the sidelines of a press conference on Tuesday previewing the 2017 event, which will be held from May 16 to 18, at the Venetian Macao’s Cotai Expo.

G2E Asia is jointly organised by the American Gaming Association and Reed Exhibitions.

Reed is anticipating there will be 12,000 trade visitors from 90 countries and regions, with 30 percent of attendees expected to be senior decision makers.

The organisers expect 180 exhibitors – an increase of approximately 20 percent on last year’s event. Around 50 of the exhibitors will be first-timers.

The organiser added that there will be 400 on-site pre-arranged meetings. Attendees can also organise their meetings and contacts before, during and after the event via the G2E Asia Mobile App.

A senior analyst at Morgan Stanley gave a presentation on the outlook for the Asia Pacific casino industry during the G2E Asia 2017 press preview.

Praveen Choudhary, managing director and head of Asia gaming research at the banking group, said it was “an exciting time” for the sector, with growth returning to Macau casino gross gaming revenue for the past six months after “at least” two-and-half years of downturn; and an enabling bill passed in December to legalise casino gaming in Japan.

Mr Choudhary indicated it was still too early to assess what impact Japan might have on the Macau market.

“It is probably going to take three to five years before the first casino will open there [Japan], and that’s a starting point,” the analyst said in his presentation. “We were at the same point in Macau 10 years or more ago,” he added, referring to the early years of Macau market expansion after six operators were allowed in the city following liberalisation in 2002.

The G2E Asia 2017 event will feature three new segments: the Integrated Resort Experience; the Parts and Components Pavilion; and the Future Technology and Leaders Get-together.

The first will feature services, products and technology used to support casino resorts as well as content concerning clubs and bars, and general entertainment.

The second new segment will showcase the companies that supply some of the technical gadgetry inside gaming machines and equipment. The third segment will be a networking initiative featuring approximately 125 industry leaders including chief information officers; chief marketing officers, information technology directors and managers; and gaming regulators.

The Asia Gaming Awards, hosted by Asia Gaming Brief, will return after its inaugural edition last year, with the awards dinner this year expanded to cater for 500 guests.

G2E Asia 2017 will also be used to launch Lex Mundi ‘s Global Gaming Legal Guide. Lex Mundi is described as a leading network of independent law firms. MdME Lawyers is the Macau partner, and Deacons is the Hong Kong law firm partner for the guide. It will cover the following topics: legality; licensing and regulation; proceeds of gaming; anti-money laundering; specific issues relating to social and skill-based gaming; enforcement issues; plus planned and future changes to legislation.

Some Macau casinos visited by GGRAsia on Thursday, actually had tables that were closed, notwithstanding strong consumer demand during Chinese New Year (CNY). The reasons for some tables being... END_OF_DOCUMENT_TOKEN_TO_BE_REPLACED