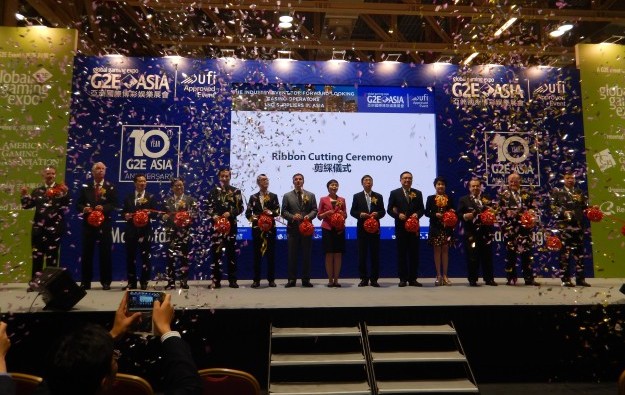 A total of 6,500 visitors from 95 countries had pre-registered for the Global Gaming Expo (G2E) Asia 2016 conference and trade exhibition, according to the organisers. The three-day event kicked off today, Tuesday, at the Venetian Macao casino resort.

The figure was provided by the president of Reed Exhibitions Greater China, Hu Wei, during the event’s official opening ceremony, held on Tuesday morning.

G2E Asia, an event focused on the Asian casino gaming industry, is co-organised by Reed Exhibitions and the American Gaming Association. The organisers had stated previously they aimed to welcome a total of 12,000 visitors – including on-the-day registrations – to G2E Asia 2016.

The 10th edition of G2E Asia features 180 exhibitors, a 12-percent increase from the 2015 edition. “It is clear G2E Asia is the show the industry trusts,” Mr Hu said in a speech.

“The Asian gaming industry is currently undergoing a transformation that is presenting numerous exciting opportunities,” Mr Hu said. He added G2E Asia was “the perfect place” for industry professionals to meet and discuss business opportunities.

“We couldn’t be more excited to see what has happened in Macau for the past 10 years,” said the president and chief executive of the American Gaming Association, Geoff Freeman, during the opening ceremony.

Mr Freeman said G2E Asia would provide “fantastic educational content and opportunities for people across Asia to learn the latest information in gaming trends and how they can improve their business”.

The G2E Asia 2016 programme includes the first-ever “Gaming Regulators’ Networking Luncheon”. The closed-door event aims to bring together representatives of gaming regulators from Asia and elsewhere.

The exhibition portion of G2E Asia has tripled in floor size since the first show, according to the organisers. The 2016 edition covers more than 9,200 square meters (99,028 sq feet) of exhibition space.

Macau’s casino gross gaming revenue (GGR) for the first five days of February is estimated at MOP1.9 billion (US$235.1 million) – or MOP380 million per day – a level that suggests a “45... END_OF_DOCUMENT_TOKEN_TO_BE_REPLACED