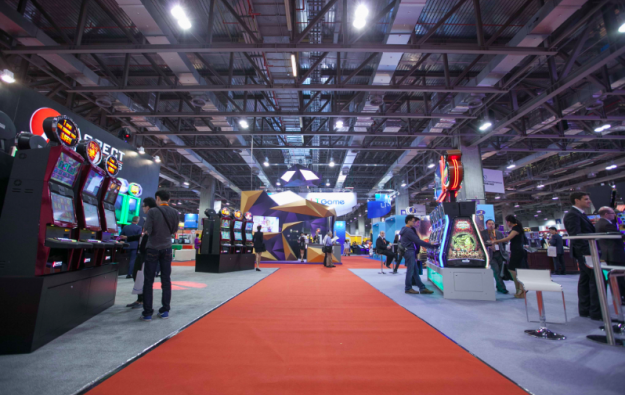 Reed Exhibitions – a co-organiser of the Global Gaming Expo (G2E) Asia casino industry trade show normally held in May in Macau – has spoken to the organisers of Macao Gaming Show (MGS), a rival event that had its first edition last November, about combining the two events, GGRAsia has learned.

Both shows cater to a segment of the casino industry – the manufacturing of electronic gaming machines and floor management systems – that essentially relies on cheques written by the venue operators.

Nonetheless such technology can according to the supply industry create new value by responding to changes in how consumers – such as the generation born since 1981 – play casino gambling games.

“I know we have spoken to them about partnering and maybe trying to come together,” Nancy Walsh, president, North America, for Reed Exhibitions, told GGRAsia, referring to the possibility of G2E Asia and MGS combining their efforts.

“I think it would have been for the customers – an easier experience,” she added.

“I think in the main they [the MGS organisers] feel there’s still an opportunity to have both events in Macau. And we do too,” Ms Walsh told us.

Mike Johnson, a former industry vice president for G2E events at Reed Exhibitions, who left the company reportedly for personal reasons shortly before this year’s G2E event in Las Vegas, had told GGRAsia in August: “We remain very open to that idea [combining the two Macau shows]. But we have not had any formal conversations for quite a while.”

What some in the global casino industry regard as the junior event – MGS – is to hold its second edition at Cotai Expo at the Venetian Macao from November 18 to 20.

Under the status quo in the Macau-based casino show market, casino technology suppliers are being asked to attend two Cotai Expo trade show events fewer than six months apart. That’s against a backdrop of mergers and acquisitions currently occurring in the global equipment supply industry that could lead to as much as US$600 million in costs being cut from the process according to publicly available information quoted at G2E in Las Vegas last week.

“That’s the industry saying ‘Somehow we have US$600 million too much in costs’,” said Jamie Odell, chief executive of Australia-based slot machine maker Aristocrat Leisure Ltd.

Macau and the Asia Pacific region do however offer growth opportunities to the equipment industry via jurisdictions that are either building new venues or newly-legalising casino gambling; while in other, more mature markets such as North America, replacement rates for equipment appear to have slowed.

Macau could need as many as 7,000 new gaming machines of various types each year until 2017 to cater for the next wave of casino openings on Cotai, the new Las Vegas Strip-style area away from the traditional downtown casino zone, according to a report commissioned by Macao Polytechnic Institute and published in November.

Nonetheless, despite Macau’s revenue from casino games of fortune in 2013 being around seven times greater than that generated by the Las Vegas Strip in the same period, the U.S. market as a whole still offers bigger opportunities to equipment makers than does Macau – and possibly the other legalised Asian markets combined. Nearly 96 percent of Macau’s approximately MOP360.75 billion (US$45.2 billion) in GGR last year came from traditional table games, not from machine games.

Additionally, industry sources tell GGRAsia the opportunity costs of entering the Macau equipment market have been rising, with recent changes to machine regulations showing some divergence from those in other major regulated markets.

In the U.S., although new licences and new properties have been added to the market mix in recent years, replacement orders for machines were “50 percent lower” in 2013-14 than had been forecast by the industry three years earlier, said Mr Odell.

A note from investment analyst Cameron McKnight of Wells Fargo Securities LLC in New York last week said that there was an annualised 45,000- to 50,000-unit replacement rate for casino gaming machines in the U.S. market in the first half of 2014 – up to seven times the size of the potential annual Macau market for new machines as described by Macao Polytechnic Institute.

However recent statements made to a Hong Kong financial newspaper by Jay Chun, chairman of Paradise Entertainment Ltd, parent of LT Game Ltd, which makes a live dealer electronic baccarat game popular in Macau, appeared to talk up the prospects of the Macau market for machines.

After publication of the comments, Paradise Entertainment’s share price showed unusual price movements and trading volumes, the firm reported on Monday, but said it was “not aware of any justification” for it.

The same filing noted however Mr Chun had told the Hong Kong Economic Journal – a Chinese language business newspaper – that he expected there would be an “increase in demand of electronic gaming machines…up to 20,000 by Macau casinos in the forthcoming three years,” and that this would likely lead to a 30 percent rise in revenue for his group.

The imminent return of package tours from mainland China will not only help boost Macau’s tourism businesses, but is also expected to help casinos gain more foot traffic in their mass gaming... END_OF_DOCUMENT_TOKEN_TO_BE_REPLACED