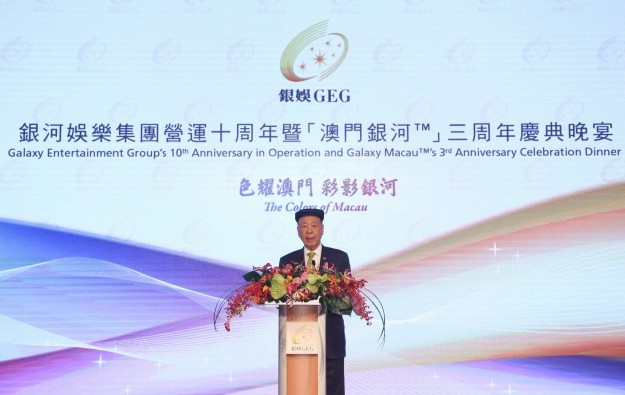 Mr Lui said the foundation is committed to giving back to the society, including supporting young people in entrepreneurship and in attempting new endeavours.

“We hope that we can continue to work collaboratively with all sectors of Macau to mutually develop our city and to ensure that it remains a great place of prosperity and stability,” Mr Lui said in a speech to mark the tenth anniversary of Galaxy Entertainment.

Mr Lui also said that Phase 2 of the company’s Galaxy Macau resort on Cotai is on target to open in mid-2015. In recent comments about the expansion of Galaxy Macau, Mr Lui said he expected the company net profit to grow in 2015 by as much as 50 percent year-on-year thanks to the opening of Phase 2. It is spending HK$19.6 billion on Galaxy Macau Phase 2.

Construction of Phases 3 and 4 is expected to start “as early as the end of 2014”, with a total investment of HK$60 billion, Mr Lui said.

In previous reports, the company had said the project would “target premium mass guests, with non-gaming amenities representing approximately 95 percent of the total floor area…”

Macau recorded 965 “gaming-related” crimes in full-year 2022, down 29.7 percent on the 1,372 identified in the previous year, according to the latest statistics published on Tuesday by... END_OF_DOCUMENT_TOKEN_TO_BE_REPLACED