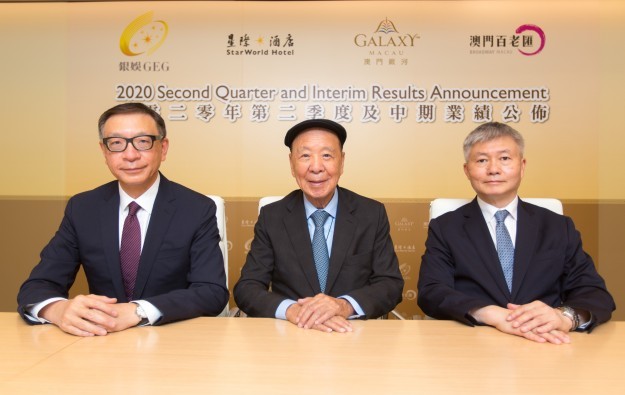 Macau casino operator Galaxy Entertainment Group Ltd says it was able to reduce further its operating expense during the second quarter of 2020, compared to the early days of the Covid-19 pandemic. But the firm’s vice-chairman Francis Lui Yiu Tung said in a Thursday webcast that it was still “too early” to assume when the group will be able to reach break even in terms of earnings before interest, taxation, depreciation and amortisation (EBITDA).

The webcast followed the release of Galaxy Entertainment’s second-quarter results. The casino group reported negative adjusted EBITDA of HKD1.37 billion (US$176.8 million) for the three months to June 30.

The casino operator’s financial results comes on the heels of China’s announcement that it would be reinstating tourist visas to Macau for Guangdong province in late August, and for rest of mainland China’s provinces in late September.

“I don’t think … we can tell the ‘worst time’ is over,” said Mr Francis Lui (pictured, left). “The reinstatement of the individual visit scheme [IVS] … is an important first step. The thing to do now is to contain the [Covid-19] pandemic and we cannot afford to relax. Because the minute things go wrong, the IVS will be withdrawn again,” added the executive.

During the webcast, Mr Francis Lui also highlighted that the firm had been able to reduce its operating cash burn during the second quarter.

“In the first quarter, we spent about US$3.4 million a day. So far in the second quarter, that number has gone down to US$2.5 million a day,” said the vice-chairman. “We hope that we can continue to make efforts so what we would be able to maintain the living standard for our staff, and that we can better manage our finances,” stated Mr Francis Lui.

“But as to when we will be able to break even, I think it is too early to say,” he added.

In a Thursday note, brokerage Sanford C. Bernstein Ltd said Galaxy Entertainment’s management had done a “good job” on cost controls, as it continued to reduce its operating cash burn.

The firm’s management was quoted as saying on an investors call with analysts on Thursday that “EBITDA breakeven could occur with revenue back to low 30s percent of fourth-quarter 2019 level,” according to Sanford Bernstein’s memo. “Premium mass and VIP segments would likely lead the early stage of recovery,” added the institution based on remarks during the call.

The firm’s management noted during Thursday’s webcast that it would continue to avoid redundancies despite the difficult trading period brought about by the coronavirus health crisis. But when asked whether Galaxy Entertainment would consider lifting the present non-paid leave policy once the number of visitors to Macau increases, Mr Francis Lui said: “We are closely monitoring the situation. Now that the individual visit scheme has only been reinstated for a day [for Zhuhai residents], it is too early to make a prediction.”

During the webcast, Lui Che Woo (pictured, centre), Galaxy Entertainment’s chairman and founder, said that the progress of the Phase 3 and 4 of the group’s flagship property Galaxy Macau was “on schedule”, despite the impact of the pandemic.

According to information from Galaxy Entertainment’s management, the pandemic could affect the “import of construction materials and labour,” thus resulting in an “understandable” delay to the expansion of the of Galaxy Macau casino resort complex.

In a Thursday memo following Galaxy Entertainment’s earnings  release, JP Morgan Securities (Asia Pacific) Ltd remarked on the timeline for Phases 3 and 4 of Galaxy Macau: “We understand its target opening is ‘by mid-2021’, though we’ve assumed an estimated third quarter 2021 in our model reflecting potential delay due to Covid-19.”

The decision by the Macau government to grant fresh 10-year licences to each of the city’s six incumbent casino operators has been welcome by top management at those firms. Each of the concessions... END_OF_DOCUMENT_TOKEN_TO_BE_REPLACED