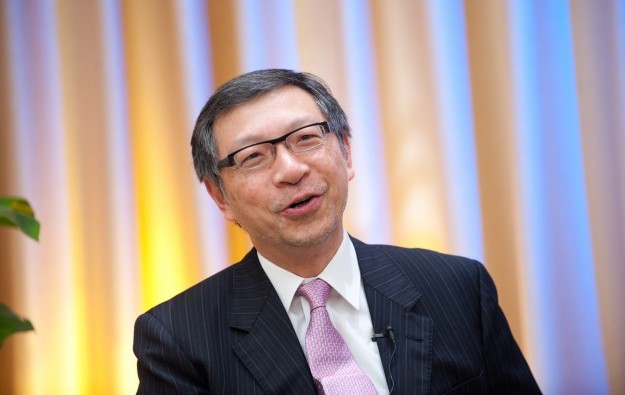 A senior Galaxy Entertainment Group Ltd executive on Friday said he believed the Macau government would think “very carefully” before deciding whether to increase Macau’s effective tax rate on gaming from its current level of 39 percent. A possible four-percentage point rise to 43 percent was mentioned recently by brokerage CLSA Ltd.

A hike to the gaming tax has long been discussed as a possible change of condition applicable to any future Macau gaming licences. The current licences expire in 2020 and 2022. Such a change has recently been mooted as part of a “mid-term review” of the current six operators that is planned by the Macau government in 2015.

Francis Lui Yiu Tung (pictured), vice chairman of Galaxy Entertainment, gave his view on the tax issue while speaking on the sidelines of a press conference to announce more details of the firm’s HKD19.6 billion (US$2.5 billion) Galaxy Macau Phase 2 and its accompanying HKD5 billion ‘Broadway at Galaxy Macau’ property.

The business model of new Cotai resorts is already under some pressure from a raft of issues including a downturn in gambling spend by mainland Chinese visitors and some uncertainty – at least in terms of public announcements – about how many gaming tables the new resorts will have.

Mr Lui stated regarding the tax issue: “We are realistic [enough] to say the government will look into all aspects before making a decision. This is a major decision to be making, and I think the government would be making such a decision very carefully.”

Galaxy Entertainment said at Friday’s press conference it is aiming to open Galaxy Macau Phase 2 with “the majority” of its facilities on offer to the public.

But there was no detail on how many new-to-market gaming tables the scheme would have either at its launch on May 27 or after launch.

Galaxy Entertainment has said in previous public statements that Phase 2 has capacity for 500 tables and 1,000 slot machines.

“Management note the number of gaming tables to be granted is as yet uncertain,” said Anthony Wong of UBS Securities Asia Ltd in a note issued in Hong Kong on Friday.

“The more notable gaming product [in the new venue] is the Sky 38 – likely a Sky casino lounge that will be in addition to the current Sky 32 and Sky 33,” added Mr Wong, referring to Galaxy Macau’s existing ultra-luxurious gaming facilities located far from the mass floor. At those lounges – at least prior to the recent gambling downturn – Chinese players were asked to guarantee bet volume of at least RMB10 million (US$1.6 million) per visit, Galaxy Entertainment management confirmed to GGRAsia on Friday.

Deutsche Bank AG analyst Karen Tang said in a note on Friday that Galaxy Entertainment was in talks with the government regarding the tables that would be available for Galaxy Macau Phase 2.

Robert Drake, chief financial officer of Galaxy Entertainment, told the media briefing in Macau: “Our intention is to open with the majority of our operations as we have done historically with Phase 1. But as far as tables are concerned… we are going through that process right now of working with the government on the submissions… and we are quite confident we will get a sufficient amount of tables to generate the returns we have been forecasting.”

Galaxy Entertainment is doubling the size of its footprint in Cotai with Galaxy Macau Phase 2 and Broadway, adding as much as 550,000 square metres (5.9 million sq. feet) of new amenities.

Mr Drake was asked about a note from Japanese finance house Nomura on Wednesday suggesting the return on invested capital (ROIC) on new Macau projects could decline to 15 percent per year from 25 percent, because of the downturn in gambling by Chinese patrons and that is linked to the mainland’s anti corruption campaign and other market-cooling measures, including tougher rules on transit visas used by Chinese VIP players.

He declined to give a specific estimate for ROIC on Galaxy Macau Phase 2.

Lui Che Woo, founder and chairman of Galaxy Entertainment, had earlier expressed his gratitude to the Macau government for the chance of a gaming operation in Macau. The city generated US$44 billion in gross gaming revenue (GGR) in 2014, despite a 2.6 percent year-on-year decline in GGR.

“We were lucky to be given the opportunity to enter the Macau market in in 2002,” said the chairman, adding that the company’s aims were “aligned” with the Macau government’s goal of developing the city as a “world centre of leisure and tourism”.

Galaxy Entertainment’s vice chairman Francis Lui said the firm’s commitment to diversifying the local economy was strong. He said that the company would also be giving more detail shortly on its plans for non-gaming facilities on neighbouring Hengqin Island – a special economic zone of mainland China, next door to Cotai.

Galaxy Macau Phase 2 and Broadway will add more than 1,500 new hotel rooms to Cotai, taking the tally on the whole Galaxy Macau site to 4,000 rooms (including Broadway).

“In 2015, we are looking to hire more than 8,000 new employees,” to staff the firm’s new operations at Phase 2 and Broadway, Francis Lui told the media gathering.

On the sidelines of the event, Mr Lui added: “So far we have recruited over 1,000 people, so we are optimistic that we should be able to recruit the rest of them.”

He expected some of the new people would be non-locals.

The vice chairman added that Galaxy Entertainment’s performance in non-gaming was already “very impressive” but it tended to be dwarfed by the growth in gambling revenue seen across the Macau market in recent years.

Galaxy Entertainment’s new non-gaming offer announced on Friday and to be launched on May 27 includes shopping, dining and a theatre, the latter to be located at the new Broadway venue. This new property was created after a HKD5 billion refurbishment of what was the neighbouring Grand Waldo Entertainment Centre – a previously independently managed casino hotel under the Galaxy Entertainment gaming licence. The revamped site will be linked by air-conditioned corridor to Galaxy Macau.

Galaxy Macau will also have improved facilities for “meetings, incentives and banquets” that can accommodate up to 3,000 guests, the firm said.

The vice chairman said that for weddings, banquets and “evening entertainments”, Macau was already competitive with other places. Macau has a marketing campaign specifically designed to encourage couples to have their nuptials in the city.

But he said the city “needed to address” its logistics and transportation systems before it could become competitive globally in the conferences market.

Mr Lui added: “Because of the huge denominator in the gaming segment, it takes time to see a clear shift with more and more non-gaming.”

Starting from 1am on Tuesday (August 9), most travelling directly by air or sea to Macau from mainland China are required to take a nucleic acid test (NAT) upon arrival, plus another such test within... END_OF_DOCUMENT_TOKEN_TO_BE_REPLACED