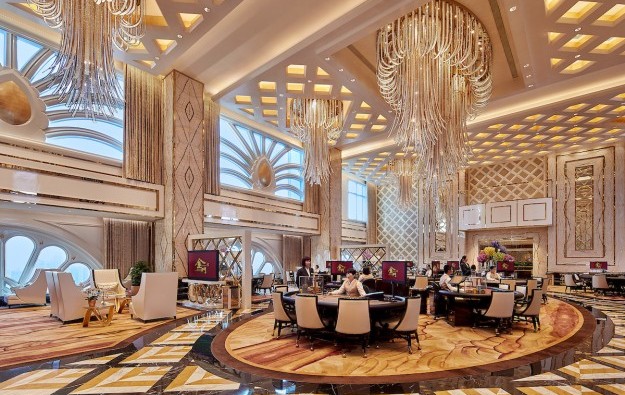 “JinMen8” (pictured) is on the 50th floor of the hotel tower that also houses the Ritz-Carlton, Macau.

The firm said the newly-launched product involved an investment of approximately MOP300 million (US$37.3 million). It caters for what it termed “direct premium” play, i.e., in-house VIP business with credit being extended by the casino operator rather than via junket partners. The company said the launch would be the only expansion this year for the group’s direct VIP offering.

The information was given by Benedict Wan, senior vice president for international premium and mass market development. The JinMen8 club – which the executive noted had taken three years to realise – features 18 gaming tables on an open floor, plus five salons. Two of those salons offer respectively a pair of gaming tables. The other three salons are equipped with one table each.

Live-dealer baccarat tables were predominant on the floor during a guided tour of the facility for media. The betting limit per table of the baccarat games offered at the club range from HKD1.5 million (US$186,400), to a maximum at HKD3 million, Mr Wan explained.

“For this year, JinMen8 is the only expansion for the direct premium business,” he stated. The firm has no plan for another JinMen product in the currently operating phases of the Galaxy Macau resort, but it will “have more facilities for VIPs” in the future, he added.

The firm is preparing an opening ceremony on Saturday for the JinMen8 club, Mr Wan said. In total, the firm hosts “14 salons” in all its Macau resorts under the in-house JinMen brand.

“As JinMen always has a lot of VIPs from all around the world, we welcome both in-cash [play] and in-credit,” Mr Wan remarked to media when asked about the clientele for the new club.

“We have a lot of regional players. They are from Hong Kong, Taiwan, Thailand, and other Southeast Asian places. Even sometimes we have players from the U.S., or South Africa. But of course I can say that Greater China is our major client source,” the firm’s executive added.

The JinMen8 club pledges to provide its members with a “tailor-made” butler service, including VIP dining with catering from Galaxy Macau’s upmarket Cantonese restaurants Fook Lam Moon and Lai Heen.

Mr Wan also noted that the firm is “positive” on the prospect for the direct VIP gaming segment, despite some seasonal setbacks such as the recent Typhoon Mangkhut.

“With the infrastructure such as the Hong Kong-Zhuhai-Macau Bridge and other facilities, we have confidence in the long run… that’s why we keep investing in our casino products,” Mr Wan remarked.

The executive was also asked to comment on what impact if any Macau’s updated policy on casino smoking might have on high-stakes play. Many Chinese high rollers are understood to be smokers, and many existing VIP facilities have been allowed to continue offering tableside smoking for a grace period.

The Macau government is nonetheless moving to a system of no smoking at any tables, including VIP ones, and instead will require operators to shift their VIPs to using separate smoking lounges, as already happens on the casino main floors.

The city authorities have requested Macau’s casino resorts to operate new, higher-standard smoking lounges on all of its gaming floors by January 1, 2019. Macau’s gaming operators have to submit by September 28 any applications for new smoking lounges, in order for such requests to have a chance of being approved before the city’s new regime on smoking is enforced in casinos on January 1.

“We don’t think there will be any negative impact to the [gaming] business. Basically if all of Macau casinos are compliant to the non-smoking rules, they are the same everywhere. Players will still come here,” Mr Wan said, referring to the Macau market. He added that the new smoking lounges incorporated into the design of the new JinMen8 club – seven in total – are awaiting Macau government inspection and approval.

China has moved one step closer towards reopening, by relaxing some its Covid-19 control measures, with most infected people now able to quarantine at home rather than in state-sanctioned... END_OF_DOCUMENT_TOKEN_TO_BE_REPLACED