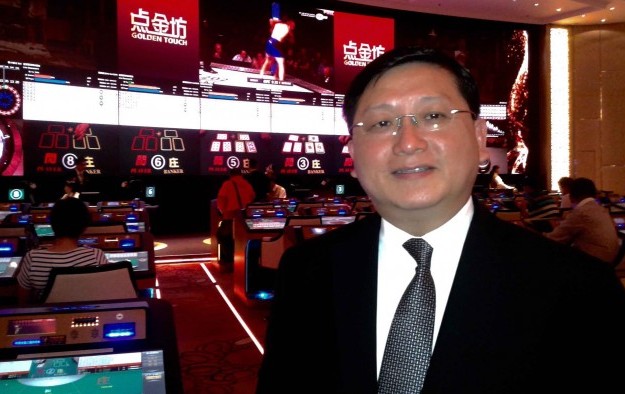 Macau casino operator Galaxy Entertainment Group Ltd on Monday launched a new mass market gaming area on the third floor of its StarWorld Hotel in downtown Macau. It includes a 108-seat stadium-style electronic table game area that can offer up to eight live-dealer games featuring baccarat, sic bo and roulette; with minimum bets of HKD25 (US$3.22). The stadium installation also has what the company says is Macau’s largest “infotainment” screen. The screen has content such as video of sporting events, as well as the results of the electronic table games.

The third floor gaming area also has 14 traditional live-dealer gaming tables and a range of slot machines, as well as a restaurant open to the public.

Raymond Yap Yin Min (pictured), the company’s director for international premium, premium mass and mass market development, said: “We use SMS and [email] blast to inform our members and we communicate the new gaming location and destination by whatever channel we can.”

Asked about perceptions among some investment analysts that Galaxy Entertainment’s strength had been in VIP play rather than the mass market, Mr Yap said: “Just like any other operator, we have to adjust to the drop [fall] of the VIP segment. I think the industry is consolidating and that consolidation may continue; but it is really the outcome of the transformation of the [Macau market] to the mass and premium mass [segments] and to other electronic gaming.”

Commenting on the July results, Mr Yap said: “It looks like a good sign. It [the decline] is single-digit and looks like it is narrowing the gap… we only had a marginal drop year-on-year, so we are hoping the second half [of the year] will be better.”

Asked if he was concerned that GGR market-wide was still declining – for a 26th consecutive month – from its already lowered base, Mr Yap stated: “As far as we are concerned we have had a full refreshment of our operation since May, so this is our [basis for] year-on-year comparison. As long as we register small growth over last year I think we will be very happy.”

The new stadium installation on level three at StarWorld has been supplied by LT Game Ltd, a brand of Hong Kong-listed Paradise Entertainment Ltd. The LT Game stadium-style installations in Galaxy Entertainment properties are being branded as “Golden Touch”, said Mr Yap.

“The LT Game [product]… and the rest of the ETGs [electronic table games] have registered growth in the last couple of months. So this is a very promising future for us to get into this area,” he added.

According to the gaming regulator, casino GGR from live multi game – a category of electronic table using a live dealer but electronic betting and bet settlement – rose 11.5 percent year-on-year in the second quarter of 2016, to MOP562 million (US$70.3 million), from MOP504 million in the prior-year period.

Mr Yap was asked for his reaction to recent comments from Paulo Martins Chan, director of the gaming bureau, that there would be new regulation for ETGs next year.

“I have no further information about this. I’m not sure what the DICJ is referring to. We will wait for the regulation and then we will act accordingly,” noted Mr Yap.

GGRAsia also asked Mr Yap about rumours among the investment community that a junket – which is typically a third party gaming promoter licensed by the Macau government and allowed to operate within a concessionaire’s casino – had been continuing to operate telephone or ‘proxy’ betting at a Galaxy Entertainment casino; despite the gaming bureau’s instruction in May that telephones should not be used at tableside.

He added: “We will follow all the regulation that is set by the DICJ. If they do not permit [something] then we comply accordingly.”

Mr Yap was also asked about whether the budget for Galaxy Macau Phase 3 – the next phase of the firm’s flagship Cotai resort – had been reduced in the current tougher trading conditions for Macau casino operators.

Francis Lui Yiu Tung, vice chairman of Galaxy Entertainment, had been quoted in a July interview with Chinese-language newspaper Macao Daily News as saying the budget for Phase 3 and Phase 4 would be “HKD40 billion to HKD50 billion”. A filing by the company in the first quarter of 2014 had referred to a budget of HKD50 billion to HKD60 billion for Phases 3 and 4.

Mr Yap said: “I don’t think the budget has been adjusted down; it depends on the phases we are going to roll out, and the components within them. I think before we announce the master plan for Phase 3 and Phase 4, we only [then] make that judgement. It will depend on … consumer trends.”

He added: “It’s never been a fixed sum and a fixed component that we will put in [the project] – until we make an official announcement.”

Asked if there would be a theme park element to Phases 3 and 4 – as mentioned by company chairman Lui Che Woo in an interview with Bloomberg published in March, Mr Yap said: “We have thought about a theme park component.”

Pressed on whether it would actually happen, Mr Yap stated: “As we expand the non-gaming portfolio, that theme park must be one of the areas that we seriously consider. And Macau is obviously short of a family theme park.”

Macau is to create distinct zones on its casino floors and designated gambling chips that will be solely for the use of players from overseas. The moves will be part of a new gaming tax system to... END_OF_DOCUMENT_TOKEN_TO_BE_REPLACED