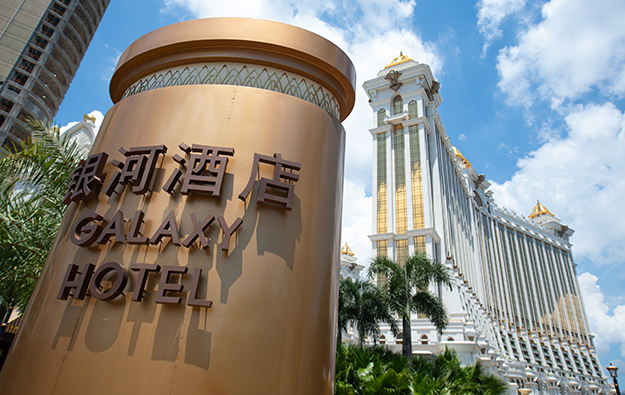 Third-quarter net revenue at Macau casino operator Galaxy Entertainment Group Ltd declined 23.1 percent sequentially to HKD4.28 billion (US$549.7 million), from HKD5.57 billion in the second quarter. Such revenue was up 176 percent from the prior-year period.

The firm gave the information in unaudited performance highlights, filed with the Hong Kong Stock Exchange on Thursday.

The company chairman, Lui Che Woo, noted in remarks in a press release that during the third quarter, mainland China and Macau experienced “highly-publicised periodic outbreaks of Covid-19”.

Mr Lui added: “As a result, selected travel restrictions were implemented during these periods which severely impacted” visitor volume to Macau and revenue.

Adjusted EBITDA at Galaxy Macau was down 50.9 percent sequentially, at HKD454 million.

Hotel occupancy for the third quarter across the five hotels at Galaxy Macau was 45 percent, said the firm.

Total net revenue at the group’s StarWorld Hotel on Macau peninsula was HKD664 million, down 28.8 percent from the second quarter. Adjusted EBITDA at StarWorld was down 81.5 percent sequentially, at HKD25 million.

Occupancy for StarWorld’s hotel space was 56 percent in the third quarter.

Broadway Macau, next door to Galaxy Macau, recorded no gaming revenue for the period. Normal commercial operation of the hotel remained “suspended” during the third quarter, said the company.

The firm said the group’s balance sheet remained “liquid and healthy”. As of September 30, cash and liquid investments amounted to HKD38.4 billion and the group’s net cash was HKD27.8 billion.

In the update, the company modified the language used to describe the opening in 2022 of the Raffles-branded hotel that is a key portion of Phase 3 of the Galaxy Macau resort.

The firm said it aimed to open Raffles, a 450 all-suite tower, “in 2022 aligned with prevailing market conditions”.

In its first-quarter highlights in May, Galaxy Entertainment had mentioned the “later part of 2021 or early 2022” for the launch of Raffles. In the first-half and second-quarter results, it mentioned simply a target of “early 2022”.

Chairman Mr Lui was cited in the third-quarter announcement as saying the group was looking at possible investment in the Guangdong-Hong Kong-Macau Greater Bay Area, a city-cluster scheme promoted by the central government, and aimed at integrating the economies of the three places.

A number of industry commentators has mentioned such investment might be solicited by the Macau government as a condition of refreshment of their existing Macau gaming rights, which expire in June next year.

The chairman stated, referring to a long-standing aim to create non-gaming facilities in Hengqin island, a piece of mainland territory next door to Macau: “We continue to pursue our project in Hengqin and are expanding our focus beyond Hengqin and Macau to potentially include opportunities within the rapidly expanding Greater Bay Area.”

Macau’s health authorities said on Sunday that they would require all people wishing to enter the city’s casinos not only to have their body temperature measured and to display a... END_OF_DOCUMENT_TOKEN_TO_BE_REPLACED