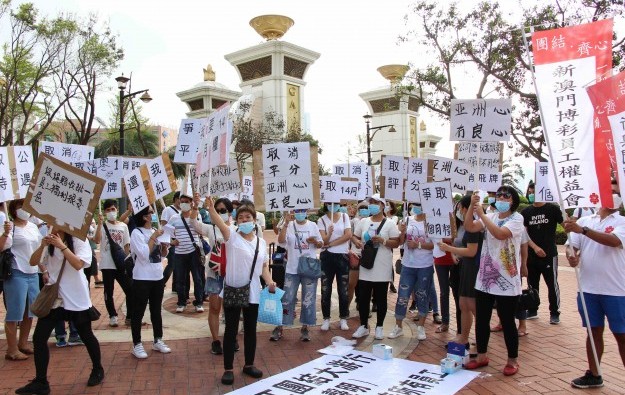 More than 100 people rallied on Tuesday outside Galaxy Macau – the flagship Cotai casino resort of Macau gaming operator Galaxy Entertainment Group Ltd (GEG) – to demand the company give its employees a ’14th month’ of salary as bonus every year from now on, and to call for a change in some of its workplace policies.

An email from the company after the event described the protest as organised by a “non-GEG employee”.

Labour grouping Professional for Gaming of New Macau said it was behind the demonstration, and claimed that approximately 300 employees of Galaxy Entertainment had joined it. Macau’s Public Security Police estimated the turnout as 150 people.

“The protest today is against the harsh way Galaxy Entertainment treats its employees,” a person who identified herself as “Wan”, and claimed to work at the company’s StarWorld Hotel on Macau peninsula, told GGRAsia.

“Now [Galaxy Entertainment] is giving us in advance [part of] the bonus from year-end. But we are saying no. This bonus was supposed to be ours anyway: they [did it] just to keep our mouth shut,” she added.

Last week Galaxy Entertainment announced it was forward-paying part of what it terms its “annual discretionary bonus” for staff, and which in total amounts to the equivalent of a ’13th month’ of annual salary. The news of the forward payment came shortly after news reports that claimed hundreds of Galaxy Entertainment employees went to Macau’s Labour Affairs Bureau (DSAL) with complaints about their working conditions at the time of Typhoon Hato, which struck Macau in August 23. According to news reports some staff complained of unpaid overtime work and insufficient rest time.

At Tuesday’s rally outside Galaxy Macau, a press release by the organiser listed six key demands: a one-month salary bonus on top of the ’13th month’ already offered by the company as a discretionary annual bonus; the cancellation of an internal staff rating system; an end to a requirement that on-duty dealers deal rounds of baccarat even when no customers are present at the table; cancellation of a warning letter system; “clarification” of the firm’s promotion system; and the removal from the Galaxy Macau property of the Horizon VIP Room. The facility is upstairs from the main casino floor and is in fact a zone for premium mass gamblers. There – under current Macau rules – part of the zone is authorised for tableside smoking by players.

Macau’s Health Bureau in June said it had received complaints that some smokers were indulging their habit in the no-smoking portion of the Horizon VIP Room.

“Let’s give the company a week and see what their responses are. If they do nothing, then we are going to gather again next weekend,” she said.

Ms Chao added that if there were to be another protest, it would take place outside StarWorld Hotel and “block” the staff entrance.

Ms Chao is a candidate in this month’s Macau Legislative Assembly election. However, she stressed to media during the Tuesday demonstration that she participated not as an election candidate, but as the president of Professional for Gaming of New Macau.

“In responding to media enquiries about a non-GEG employee organising a protest today, the company wishes not to comment on this incident,” Galaxy Entertainment stated in an email.

“However, GEG reaffirms that the company is always willing to listen to its employees, and is committed to following up on any reasonable suggestions and making any necessary improvements,” the company added.

The decision by the Macau government to grant fresh 10-year licences to each of the city’s six incumbent casino operators has been welcome by top management at those firms. Each of the concessions... END_OF_DOCUMENT_TOKEN_TO_BE_REPLACED