Galaxy Ent to be market share gainer in 2015: UBS 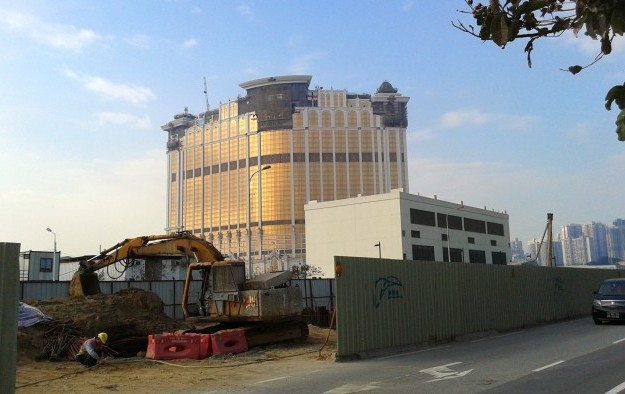 UBS estimates that Galaxy Entertainment’s market share – including the contribution of the casino operator’s City Clubs licensed by the firm but operated by other parties – will rise to 22.7 percent in 2015 from 20.7 percent in 2014, supported by likely gains in VIP business and the opening of Galaxy Macau phase 2 (pictured).

“In 2015, we expect Galaxy to be the share gainer in VIP given our expectations of Galaxy Macau phase 2 opening in May-June 2015. We expect around 150-200 net new tables will be granted to Galaxy Macau phase 2, with roughly 50-70 allocated to VIP and 100-130 to the mass floor,” said analysts Anthony Wong and Angus Chan.

“With Galaxy’s strong relationship with key junkets, we assume incremental VIP tables at Galaxy can achieve similar yields to the existing, high performing tables. We expect Galaxy’s share in VIP to rise to 27 percent in 2015,” the analysts said.

UBS said phase 2 is also likely to help Galaxy Macau gain some share in premium mass thanks to the property’s expanded facilities.

If UBS estimates are proved right, 2015 would be the first time that SJM Holdings Ltd, the company founded by Stanley Ho Hung Sun the city’s former gaming monopolist, ceded its role as Macau market leader for a full year.

Galaxy Entertainment, founded by billionaire Lui Che Woo, captured the monthly lead share in gaming revenue for the first time in September. Until then, the only other casino operator that had grabbed the lead had been Sands China Ltd.

According to UBS, SJM Holdings will see its market share – including third-party managed casinos – drop to 21.5 percent this year, from 23.4 percent in 2014. SJM Holdings’ VIP share might go down to 22.1 percent in 2015, said the brokerage, adding that the casino operator will also “continue to concede large [mass/slot] market share” at both its flagship properties and third party properties.

Sands China’s market share would decline by 0.4 percentage points to 22.4 percent in 2015, estimated the report.

The brokerage said it expects a “better performance” from Melco Crown Entertainment Ltd (MPEL), “given a management reshuffle in late 2014 and a realignment of junket partners at the Altira property”.

UBS also expects Melco Crown to maintain its mass/slot share at around 14.5 percent in 2015, helped by operations and the opening of Studio City in late 2015.

While MGM China Holdings Ltd may lose share marginally from more competition in 2015, Wynn Macau Ltd is expected to maintain its VIP and mass market share, said the analysts.

“We expect Wynn to open its renovated VIP area in early 2015, adding two rooms with 36 tables in total, which have been off the floor since early 2014.We expect the ramp up of the new space to help Wynn maintain its VIP share at [about] 11.8 percent in 2015, despite a very weak fourth quarter in 2014,” they added.

Overall, the UBS analysts expect Macau casino GGR to drop about 20 percent year-on-year in the first half of 2015, but to rebound in the second half.

“Second half should improve (+13 percent) predicated on a lack of new negative events, new supply helping mid-end demand, and an easy base,” said Mr Wong and Mr Chan.

Macau has proposed in its draft gaming bill, freshly tabled on the website of the city’s Legislative Assembly, a formal cap on the number of casino tables and gaming machines in the local casino... END_OF_DOCUMENT_TOKEN_TO_BE_REPLACED