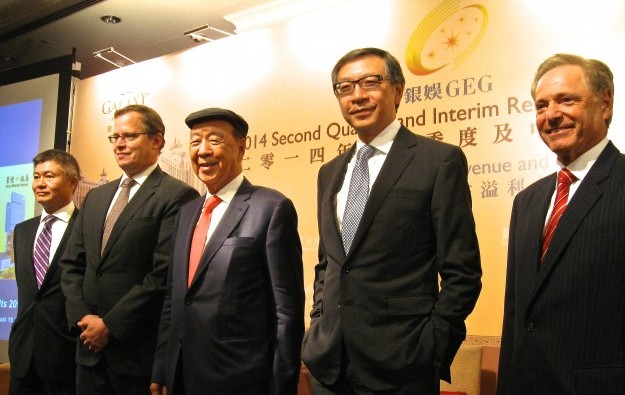 Macau casino developer Galaxy Entertainment Group Ltd on Tuesday said its revamped Grand Waldo resort on Cotai is due to “re-launch in early 2015”, with a fourth quarter 2014 announcement of the details.

That is likely to make it the first of the round of openings due on Cotai between 2015 and 2018, albeit on a more modest scale than other projects.

The company acquired the Grand Waldo in July 2013 at a consideration of HKD3.25 billion (US$419 million) from third party investors. The property’s casino was already operating under Galaxy Entertainment’s gaming licence.

GGRAsia understands the revamped venue will be themed around a “Broadway” concept, including gaming and dining. In June GGRAsia broke the news that Macau’s Official Gazette stated that a unit of Galaxy Entertainment was seeking to register the trademark “Broadway” in Macau.

When the old Grand Waldo closed for refurbishment, it had 45 gaming tables, which were then absorbed into the rest of the group’s  gaming operation. GGRAsia understands those tables will be returned to the new-look Grand Waldo complex. It will target the mass market, according to the company.

The firm added on Tuesday that the HKD19.6 billion (US$2.5 billion) Galaxy Macau Phase 2 next door on Cotai is “on schedule to complete by mid-2015”.

GGRAsia had reported on May 12 that a Chinese New Year opening for Galaxy Macau Phase 2 itself was being discussed by the investment community. Credit Suisse AG analyst Kenneth Fong said in a note on Tuesday such a timeline might still be possible. Mr Fong added construction was still on track for a “mid-2015” opening for the casino portion, and an “early 2015” opening for the shopping mall and hotel portions.

The confirmation of the early 2015 re-opening for Grand Waldo accompanied Galaxy Entertainment’s first half 2014 earnings statement.

The firm surprised some investment analysts by declaring a discretionary dividend for the first half of HKD0.45 per share.

Analysts said it was equivalent to HKD2 billion, or a 32 percent payout on interim earnings for the period.

The move came as the firm announced a 9.6 percent quarter-on-quarter decline in earnings before interest, taxation, depreciation and amortisation (EBITDA) to HKD3.46 billion in the second quarter. That was in line with market consensus.

Nonetheless, during the half year to June 30 Galaxy Entertainment’s adjusted EBITDA was a record HKD7.3 billion, said the company, up 26 percent year-on-year.

Management added it was hard for any industry – even a sunrise one such as the Asian casino sector – to maintain double-digit percentage growth from a high base.

Since June however, there have been some clouds in Macau’s previously sunny outlook. Macau has posted two consecutive months of declines in market-wide casino gross gaming revenue – a first in more than five years.

Robert Drake (pictured second left), chief financial officer of Galaxy Entertainment, conceded at a press conference in Hong Kong on Tuesday, that the “headwinds” of a softening economy in mainland China and the FIFA World Cup soccer tournament during the summer had a negative impact across the gaming sector in June and July.

But Lui Che Woo (pictured centre, left), chairman of the group, told journalists at the press conference that the dividend – and a pipeline of new projects including Phases 3 and 4 of Galaxy Macau and RMB10 billion (US$1.6 billion) previously announced for non-gaming facilities on neighbouring Hengqin Island in mainland Chinese territory – showed the company’s confidence in the future growth story of Macau and the region.

As if to underline that, the company’s deputy chairman Francis Lui Yiu Tung (pictured centre, right) also announced at the press conference that “site investigations” for Galaxy Macau Phases 3 and 4 would take place “this week”.

On the sidelines of the event, Galaxy Entertainment management declined to give GGRAsia any guidance on how quickly building work could begin on Phases 3 and 4. But sources did confirm that the investigations involved checks on the structure of the ground for the new phases, which sits on the edge of Macau’s huge Cotai marine reclamation site.

Asked about the recent calls by local workers for higher wages across the Macau casino industry, he said the company had in the past year increased staff pay by 20 percent.

“We understand that Macau has been prosperous for so many years, and we need to ensure we share that with our local employees,” Mr Lui stated.

He added however: “We have seen exponential growth, and the market is changing every day. So we need to understand what is going on in the market before we make changes.”

The deputy chairman said his company wanted to create a “win-win” situation for investors and for workers and wanted to find a “rational” solution to differences.

The term “rational” was used in a company statement following the street protest by Macau labour activist group Forefront of the Macao Gaming outside Galaxy Entertainment’s StarWorld property on Macau peninsula on August 5. Then the company thanked those of its workers that had “rationally” explained their views direct to the firm rather than via the streets.

Asked whether he was concerned that Galaxy Macau Phase 2 would not be able to hire enough people, Mr Lui said he was confident it wouldn’t be a problem, and that he understood the concerns of the incumbent Chief Executive Fernando Chui Sai On. Mr Chui indicated in his re-election manifesto delivered on Saturday, that he wanted to see locals getting a greater share of the prosperity created by the casino industry.

Group CFO Mr Drake during the press conference confirmed that the group was sitting on HKD14.1 billion in net cash on hand as of the end of June.

Despite that, the management has not yet made a decision to pay regular dividends. It has been conservative on that score, preferring to keep large cash reserves and minimal debt.

Funding for Phase 1 of Galaxy Macau faced documented challenges following the global financial crisis in 2008, with Deutsche Bank at the time referring to a “funding gap” which saw the unfinished venue briefly mothballed during 2009.

Francis Lui on Tuesday described the company’s current cash flows as “quite smooth” and indicated the current dividend policy was “conservative” but appropriate. The first dividend the firm paid on July 31 this year was HKD0.70 per share.

The disappointment in the second quarter 2014 was StarWorld, which saw a 24.4 percent quarter-on-quarter decline in property EBITDA, and a 7 percent slip judged year-on-year.

Mr Drake said a key reason was that the house at StarWorld had had “the worst luck in eight years of operations” in the casino games department. He said rolling chip turnover at the property had increased 12 percent for the first half judged year-on-year, and was up 4 percent year-on-year to HKD168.46 billion in the second quarter even in challenging trading conditions.

The verdict – and eventual sentencing – in the case involving Alvin Chau Cheok Wa (pictured in a file photo) and other defendants linked to the now-defunct Macau casino junket Suncity Group Ltd... END_OF_DOCUMENT_TOKEN_TO_BE_REPLACED