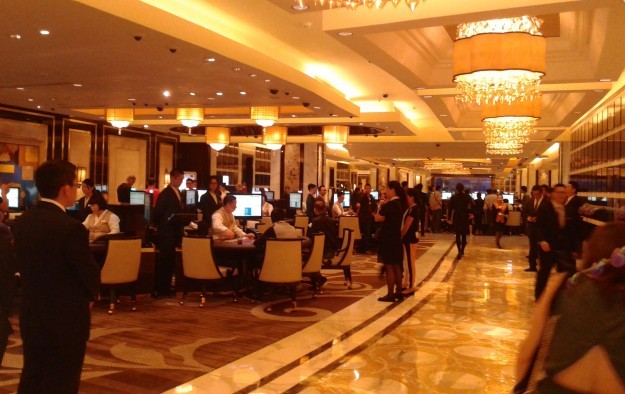 Galaxy Entertainment Group Ltd has converted the former David Group VIP area on the first floor of its Galaxy Macau casino resort in Cotai to a premium mass table gambling zone (pictured) where smoking is allowed in places.

The area is called Pavilion VIP Room but is a cash play zone operated by the house, not a rolling chip programme area run by a junket.

Players must be platinum level members of Galaxy’s Privilege Club to play there, or be invited to join the area. Platinum is the second lowest tier of Galaxy Entertainment’s four-level player reward programme.

Mr Yap added, regarding the fact smoking is allowed in what is – by traditional industry definitions – a mass-market area rather than a VIP (i.e., rolling chip programme) one: “This area was earmarked before as a VIP area. That’s why we can continue operating as a smoking zone. I think the [official] definition of VIP is not related to a rolling chip programme.”

Smoking is currently allowed in what the government terms VIP areas of Macau casinos, but is banned from mass gaming floors, except in specially designed smoking areas free of gaming tables or machines.

Asked about whether there was a growing role for the house in Macau to have Las Vegas-style player hosts, as the casinos focus on relationships with cash players at a time when the traditional, junket-managed VIP market has waned, Mr Yap told us: “We have our own high limit team. Seventy percent of them [Galaxy Entertainment group-wide] are existing people and 30 percent are new. That will speed up the learning curve for the new hosts to be able to cater for the premium services.”

The Pavilion VIP Room can be reached from the main floor by two sets of escalators, one at each end of the area. The area has 41 tables. There are two no-smoking zones of six and seven tables respectively, and the rest of the tables are for smokers.

There is also a private dining area available to players on a cash pay basis.

David Group announced in January that it was closing some Macau VIP rooms and expanding its business overseas.

Kevin Kelley, recently appointed as chief operating officer, Macau, for Galaxy Entertainment, told GGRAsia on the sidelines of the Pavilion VIP Room opening event: “I’m cautiously optimistic that Golden Week is going to be a good week.” That was a reference to an imminent holiday in China surrounding the country’s National Day on October 1.

He added, referring to the fact that ‘Golden Week’ actually contains two weekends this year, making it in effect a nine-day holiday for many: “I think we are going to face some challenges with the lengthy holiday period this year compared to last year, but the analysts shouldn’t read too much into year-over-year performance, given the fact we’re comparing it to a much longer period [of time] this year.”

International casino operator Las Vegas Sands Corp has been ranked as the most sustainable firm in the global casino sector, according to the 2023 edition of the S&P Global Sustainability... END_OF_DOCUMENT_TOKEN_TO_BE_REPLACED