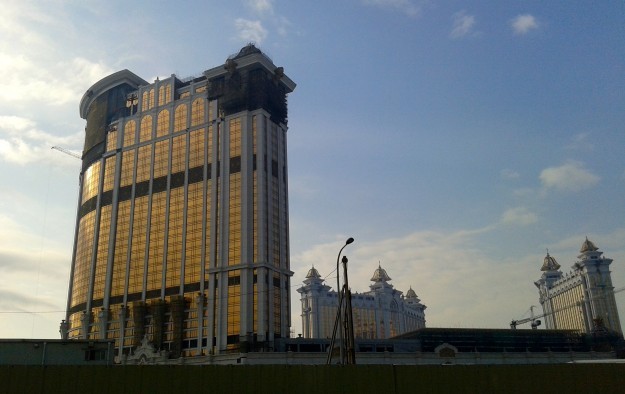 “We currently assume Galaxy Macau Phase 2 (gaming floor, retail and part of hotel tower) and the refurbished Grand Waldo would open in May,” they added.

The decline in Macau gaming revenue is likely to slow in January when judged month-on-month said UBS and several other Hong Kong-based investment analysts. But there is consensus it is still too early to talk of a general stabilisation in the market.

“We now expect full-month GGR [gross gaming revenue] to decline 15 percent to 19 percent year-on-year, in line with our expectations at the beginning of the month,” wrote the UBS team. That compares to a 30 percent year-on-year decline in December. But they added: “We expect revenue trends to be volatile in the coming weeks…”

“We expect mass revenue to rebound slightly from a low base in December, but junket VIP volumes to remain subdued at levels similar to December,” stated the UBS team.

VIP gaming revenue fell 29 percent year-on-year in the fourth quarter, according to data issued on Friday by the local casino regulator.

Credit Suisse AG on Monday said it expected January GGR to decline by a 17 percent to 19 percent year-on-year in January.

The latest assessment is based on unofficial industry returns for the month up to January 18. They estimate average daily revenue for the industry.

The note from analysts Kenneth Fong and Isis Wong at Credit Suisse said that – assuming average daily revenue of MOP700 million (US$87.7 million) to MOP750 million for the rest of the month – January GGR could drop by between 17 percent and 19 percent year-on-year.

They added, referring to high stakes gambling, in Macau, which has been hit by factors including China’s anti-corruption campaign and a slowing in the mainland economy: “We think the major rounds of earnings cuts are largely behind us and VIP is beginning to show initial signs of sequential stabilisation. That said, fundamentals still look weak, with the mass market weakening remaining a major concern.”

Analysts Jamie Soo and Adrian Chan of Daiwa Securities Group Inc, estimated in a note on Monday a 15 percent to 19 percent fall year-on-year in Macau GGR for January.

They added that according to their local sources one Macau casino operator that had banned telephone betting might be reconsidering its choice, but that “no decision has been made yet”.

The National Statistics Bureau of China on Tuesday released data on the mainland’s gross domestic product performance for 2014. It showed that China’s economy expanded 7.4 percent in 2014, the slowest full-year pace since 1990, but in line with market expectations.

Analysts noted however that statistics bureau chief Ma Jiantang used the term “new normal” when referring to the moderated pace of Chinese economic growth. A number of gaming analysts say there is a strong positive correlation between China’s GDP growth rate and that of the Macau casino industry.

Macau’s Legislative Assembly (pictured) will conduct on Monday (January 24), during a plenary session, a formal first reading of the draft bill to amend the city’s gaming law, according to a... END_OF_DOCUMENT_TOKEN_TO_BE_REPLACED