Galaxy Macau to have Andaz branded hotel, to open 1H 2021 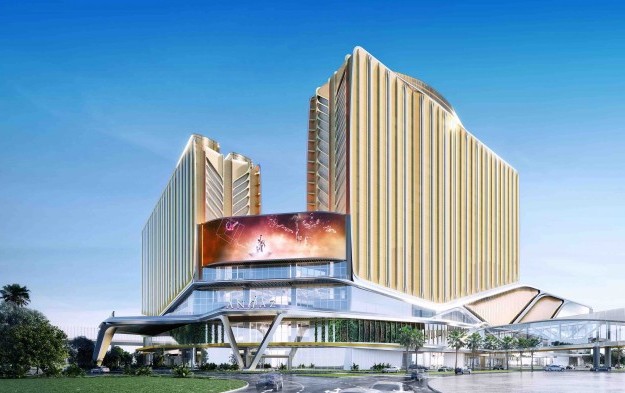 Galaxy Entertainment Group Ltd plans to open in Macau in the first half of 2021 an Andaz hotel, a brand of Hyatt Hotels Corp. It will be the first collaboration between the hotel group and the Macau casino licensee, according to a Tuesday announcement by the latter.

Andaz Macau (pictured in an artist’s rendering) will be part of Phases 3 and 4 of Galaxy Macau casino resort in the city’s Cotai district. The new hotel will have 700 rooms and suites.

Andaz Macau is also to feature what the release describes as a dedicated check-in area for groups of delegates attending meetings, incentives, conferences and exhibitions (MICE) events. That will serve those using the Galaxy International Convention Center, a facility being developed as part of Phase 3 of Galaxy Macau.

“With Andaz Macau, we will work closely with Hyatt to create experiences that truly showcase what is special” about Macau as a destination, “while further contributing to the strength of Macau’s tourism and MICE industries,” said Francis Lui Yiu Tung, vice chairman of Galaxy Entertainment in prepared comments in the announcement.

“We are honoured to launch the Andaz brand in Macau in our first collaboration with Galaxy Entertainment” as part of the casino group’s “ever-expanding integrated resorts precinct in the city,” said David Udell, group president, Asia-Pacific, for Hyatt Hotels, in the statement.

Andaz Macau will additionally feature a lounge, a bar and restaurant, a gymnasium and an indoor pool.

Galaxy Entertainment has said previously that Phase 3 as a whole would feature 1,500 hotel rooms, some casino space, and a large-scale arena with 16,000 seats. The latter facility’s capacity was confirmed in Tuesday’s announcement.

Some Macau casinos visited by GGRAsia on Thursday, actually had tables that were closed, notwithstanding strong consumer demand during Chinese New Year (CNY). The reasons for some tables being... END_OF_DOCUMENT_TOKEN_TO_BE_REPLACED