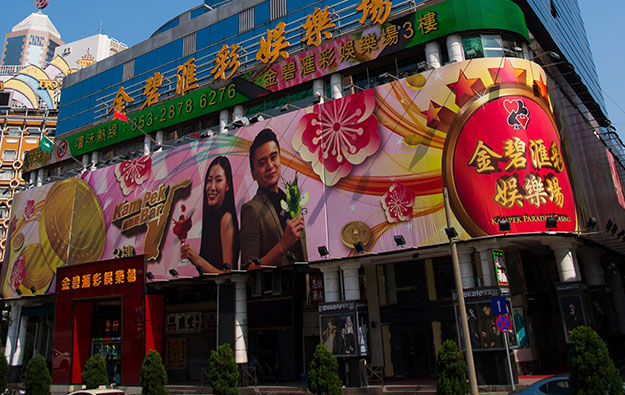 The firm said adjusted earnings before interest, taxation, depreciation and amortisation (EBITDA) reached HKD51.8 million (US$6.6 million) in the three months to March 31. That compares to an adjusted EBITDA loss of HKD10.1 million in the first quarter of 2017.

Group-wide revenue was HKD308.4 million in the first three months of 2018, up 31.1 percent from the HK$352.1 million achieved in the first-quarter 2017, Paradise Entertainment said in Monday’s filing.

Reported revenue from the development, sale and leasing of electronic gaming equipment and systems was HKD50.8 million, a jump of 170.2 percent from a year earlier.

Paradise Entertainment declared  HKD257.6 million revenue from provision of casino management services for the three months to March 31, up 19 percent from the prior-year period.

The company operates Kam Pek Paradise Casino (pictured) on Macau peninsula under the gaming licence of SJM Holdings Ltd; as well as the casino at the Waldo Casino and Hotel, under a gaming licence from Galaxy Entertainment Group Ltd.

The casino equipment maker said in March it had narrowed drastically its full-year loss in 2017 compared to the prior year. Paradise Entertainment’s 2017 loss was just under HKD30.7 million, compared to nearly HKD380.4 million for the preceding 12 months.

The casino at the Jeju Dream Tower resort (pictured), in the capital of the South Korean holiday island of Jeju, recorded KRW18.5 billion (US$14.5 million) in gaming revenue for the three months to... END_OF_DOCUMENT_TOKEN_TO_BE_REPLACED