GameCo looks to Macau with its skill casino games 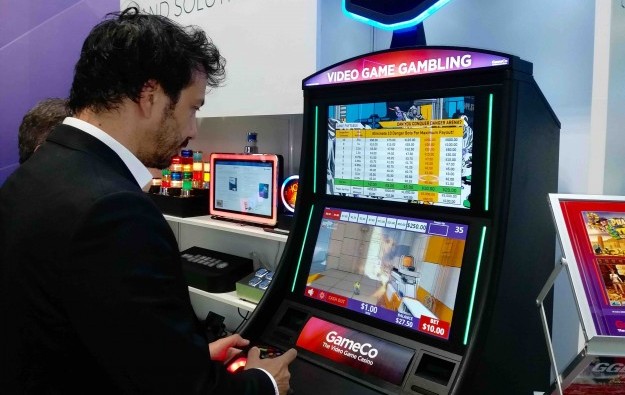 GameCo Inc, a U.S.-based developer and supplier of skill-based casino games, says it hopes to get Macau approval for its Video Game Gambling Machine (VGM) before the end of 2017.

“We are hoping to be here [in the market] in 2017,” said Blaine Graboyes (pictured), chief executive of the New York firm, in comments to GGRAsia during the recent Global Gaming Expo (G2E) Asia casino industry trade show and conference.

“We are currently working on an update of our game for the Macau 1.1 [electronic gaming machine technical] standards,” he added.

The company exhibited two games on its VGM platform during the exhibition held at the Venetian Macao. “Pharaoh’s Secret Temple” is a puzzle game using touchscreen technology. “Danger Arena” is a first-person action game controlled via a built-in player console available on the same platform.

The cabinet is based on a standard slot machine, and it and the GameCo games on it are licensed in some U.S. markets as a so-called “Class III” product compliant for use in commercial casinos.

“[In Asia] we are targeting Macau initially, with the aim of very quickly moving outward from there. We are just starting the [Macau] licensing and registration process. We have established partnerships with distributors here in Macau and other areas in Asia,” the GameCo CEO told GGRAsia.

The company’s products were introduced to three Caesars Entertainment group properties in Atlantic City, New Jersey, in late 2016 on a trial basis.

At the end of May this year, it was reported that the products had been withdrawn from those venues. But Melissa Price, senior vice president of gaming enterprises for Caesars Entertainment, was quoted saying at a recent industry conference in the U.S. that the company was still “100 percent committed” to adopting skill-based slots.

GameCo’s VGM product has been licensed in multiple U.S. jurisdictions, coinciding with an apparently increased appetite among casino operators to capture the gaming spend of the so-called “millennials” – people that came to adulthood at the turn of the century.

In May 2015, the U.S. state of Nevada passed a legislative bill backed by Nevada’s gambling equipment manufacturers to allow slot machines to add a skill-based, arcade-style element. Nevada’s regulations for skill-based games were published in September 2015.

GameCo’s Mr Graboyes told GGRAsia: “We are all about bringing video games and gamers to the casino.” He added he had been involved in making video games for “about 20 years”.

Early this month, casino equipment maker and lottery services provider Scientific Games Corp announced the launch of its first slot machine with a skill-based feature. The Space Invaders-themed slot is based on the popular classic arcade video game of the same name, it said in a press release. The game is currently available in New Jersey and will soon be available in other jurisdictions in North America, said Scientific Games. No schedule for the launch of the cabinet in Asia was mentioned.

“It gives us a really great, clear path to market. We don’t necessarily need any new ‘skill regulations’. What we need are jurisdictions that already accept GLI… or where they have a similar regulatory structure to GLI [standards],” he explained.

“There is an RNG [random number generator] in the game. The RNG picks which play field or map the player is going to see in each session. And then it’s completely up to the player’s skill to get the highest score possible, and your score is going to correlate to your payout,” the GameCo executive added, referring to the Danger Arena game.

“We have a patent on our math model that controls the system and method for return to player [RTP],” Mr Graboyes further stated.

“One of the things we did was to analyse poker, blackjack, video games and traditional games, and we found a very common correlation between the skill level [of players] across all those different games,” the GameCo CEO noted.

“In most of our [existing] jurisdictions our game runs at a theoretical above 100 percent theoretical payout. But because most players are not optimal players, it generally balances out to a 90 percent return, with a 10 percent [casino] hold. But we can build a game with any configuration,” he told us.

“It’s that spread of optimal, sub-optimal and average players that allows us to arrive mathematically at our target RTP,” Mr Graboyes noted.

Referring to the player’s viewpoint on the company’s Pharaoh’s Secret Treasure game, the CEO said: “Anyone who’s played a game like Candy Crush [Saga] or Bejeweled is going to know exactly how to play.”