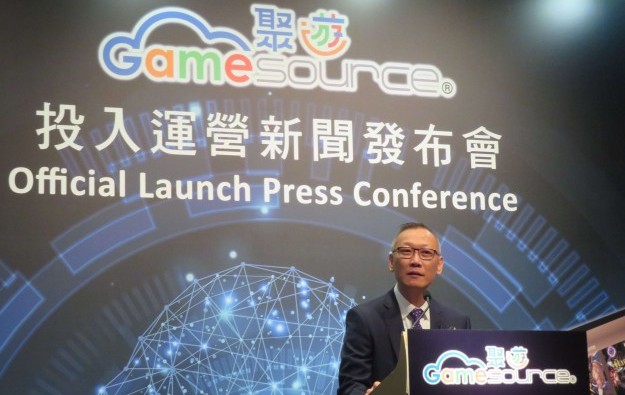 Macau-based International Alliance Systems Ltd says it would like to extend the footprint of its data-cloud-based electronic game platform GameSource to MGM Cotai, and other gaming venues in the city. The firm will introduce further games to the GameSource platform next year.

So said Anthony Ip (pictured), chief executive of International Alliance Systems. He was speaking to media on Tuesday on the sidelines of his firm’s official launch of its data-cloud-based game platform. It is being made available to players via eight fixed terminals and four hand-held computer tablets at the main gaming floor of MGM Macau, a property promoted by MGM China Holdings Ltd.

The GameSource terminals and devices are all concentrated in a zone next to MGM Macau’s Golden Lion Club membership counter on the main gaming floor. Seven games, all in low-denomination formats, are being offered.  Mr Ip noted in his Tuesday comments that further installations and upgrades of the GameSource products at MGM Macau will take place in the coming two months.

He also said it was the “intention” of both his firm and MGM Macau to deploy GameSource products at MGM Cotai, a sister property to MGM Macau. “But on that we are yet to have a detailed plan,” Mr Ip added.

The GameSource executive had noted to GGRAsia previously that the firm’s electronic game platform had gone through a “challenging” regulatory process at the city’s casino regulator the Gaming Inspection and Coordination Bureau. Scrutiny included game integrity and game security.

On Tuesday, Mr Ip elaborated slightly on player-data custody. “GameSource only provides the games, and handles the respective operation of these games. But we are separated from players’ information: basically these data are managed by the host gaming operators. We do not store the players’ data,” Mr Ip said.

For the coming year, the GameSource executive said he hoped to see his firm’s products deployed in more gaming venues in Macau, and in Southeast Asia. Meanwhile, the firm is also looking to introduce a “more diversified portfolio” of games via the GameSource library. Independent, third-party, content developers have the possibility of making their games available there.

“I believe early next year we can introduce to the market a more diversified portfolio,” of games Mr Ip said.

“As our game platform is open” in terms of source code, it can work with external programmers and potentially host “many different games designed globally that we have never seen before.” Games hosted by the GameSource library – they currently include slot machine games and electronic versions of casino table games – “will come in increasing numbers,” he added.

Local casino operators that have expressed interest in GameSource’s platform tend to opt for its table games, Mr Ip noted to us.

But what games interest local operators “really varies from venue to venue… We have some simple, fast games” for those venues pursuing novice casino customers, Mr Ip remarked.

“…we can also offer some new casual games…and skill games that are trending globally,” he noted, adding operator preference was likely to depend on “the market and the local regulatory body’s acceptance”.

It is likely that Macau will shortly have a third round of citywide centre-based Covid-19 testing in little more than a week, after the results so far of a second mass test – that was due to finish... END_OF_DOCUMENT_TOKEN_TO_BE_REPLACED